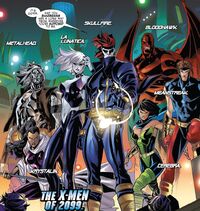 The X-Men had a similar history as their mainstream counterparts, until the time-traveling Brotherhood, posing as the original X-Men, arrived and created a divergent reality.

When those past X-Men took over the evil megacorporation Alchemax, they used it to hunt and persecute Mutants for unknown reasons, including the X-Men of 2099.[1]

When they were trying to steal medicinals to help the people who lived in the so-called Outlands, they encountered another X-Men team from the past.[2]

Together, they fought Alchemax's private police, the Public Eye, as well as the Onslaught Sentinel, until the young X-Men traveled back in time again trying to return to their home reality.[1]

Retrieved from "https://marvel.fandom.com/wiki/X-Men_(2099)_(Earth-TRN657)?oldid=5157220"
Community content is available under CC-BY-SA unless otherwise noted.