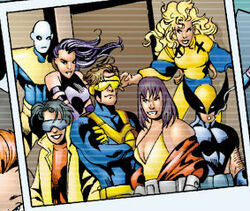 Base of Operations
X-Mansion
Affiliations

Like in many realities, the X-Men of Earth-1081 are the worlds premiere team of mutants fighting for peaceful co-existence between humans and mutants. What is known about this reality's version of the X-Men is little. Presumably, their origins and early history is mostly the same as their Earth-616 counterparts as similar adventures have been referenced.

Most of the X-Men's history on this world has been told to the reality hopping Exiles by their teammate Morph who was taken from his reality to help fixed damaged realities. Below are a list of his accounts:

Retrieved from "https://marvel.fandom.com/wiki/X-Men_(Earth-1081)?oldid=5552565"
Community content is available under CC-BY-SA unless otherwise noted.