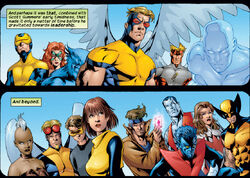 The X-Men of Earth-12 have a history that is much like their Earth-616 counterparts with a number of important differences. In this reality, mutants in general, and super-heroes in particular, are well regarded by humanity and are treated like celebrities.[1]

The X-Men have had a number of different rosters over the years. Much like on Earth-616, the original roster of the team consisted of Cyclops, Iceman, Beast, Angel, Marvel Girl, and Professor X. Another roster consisted of Storm, Mimic, Cyclops, Shadowcat, Gambit, Colossus, Nightcrawler, Wolverine and an unidentified female mutant.[1] At one point Bishop was a member of the team. The most recent known roster included Cyclops, Marvel Girl, Storm, Wolverine, Nightcrawler, Gambit and Colossus.[2]

During a clash with the X-Men, the Brotherhood of Evil Mutants was defeated. The core members retreated, leaving the knocked out Mimic behind to be captured. In prison, he was offered the chance of being released by Charles Xavier if he agreed to join his School for Gifted Youngsters. Deciding it was better than prison, Calvin accepted the Professor's invitation and became an active member of the X-Men. Training with the group, he helped them master their abilities, and he soon become leader of the team over the more timid Cyclops. Calvin became a long standing member of the X-Men, seeing them through many tragedies and triumphs before he was plucked out of his reality by the Timebreakers to be one of the founding members of the reality jumping Exiles.[3]

Ultimately Rankin died at the hands of Earth-58163's Proteus.[4] His body was returned to his home reality by his teammate and lover Blink.[2] During the funeral service, Blink was offered a membership in this world's X-Men. With her job with the Exiles unfinished she politely declined.[5]

Retrieved from "https://marvel.fandom.com/wiki/X-Men_(Earth-12)?oldid=5552574"
Community content is available under CC-BY-SA unless otherwise noted.