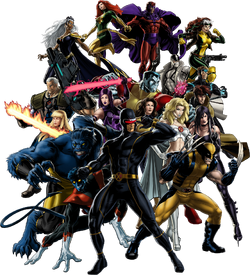 The X-Men is a group of mutants superheroes, with headquarters in Utopia, with the aim of unify mutant and humankind. After a mysterious Pulse affected technology worldwide, the X-Men helped S.H.I.E.L.D. in the mission to face new threats such as supervillains who wanted to acquire a mysterious element the Pulse left on Earth, the Isotope-8.[1]

Retrieved from "https://marvel.fandom.com/wiki/X-Men_(Earth-12131)?oldid=5755816"
Community content is available under CC-BY-SA unless otherwise noted.