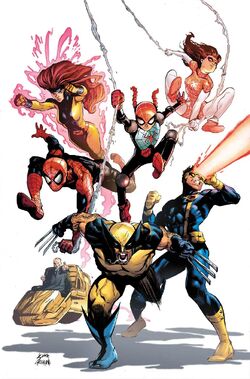 Origin
Mutants pledged to protect a world that both hates and fears them.

The X-Men were ambushed and captured by the Regent,[1] but they later appeared alive and well and were visited by Spider-Man and Spinneret with the thought of enrolling their daughter, Spiderling, at the Xavier's School for Gifted Youngsters. During the visit, the Brotherhood of Evil Mutants, led by Magneto, attacked the school and the X-Men were almost defeated by the Brotherhood, but they managed to overthrow the Brotherhood with help from the Spider-Family.[2]

Retrieved from "https://marvel.fandom.com/wiki/X-Men_(Earth-18119)?oldid=5629259"
Community content is available under CC-BY-SA unless otherwise noted.