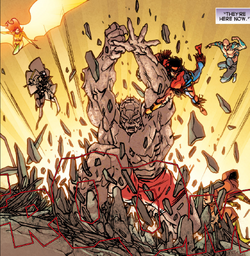 Baron Rachel Grey and her X-Men helped keep the peace in X-Topia Province. One day, Havok and his Press Gang decided to attack and invade X-Topia's capital city, X-City. Their target was X-Man Triage whose mutant powers included healing. The Press Gang hoped that his powers could be used to cure the Extinction Virus, which was ravaging the mutant that lived on their island home of Genosha.

The Press Gang was successful in capturing Triage and were also able to kidnap X-Men Rogue. Angry over the damage caused by the attack as well the treachery involved, Baron Summers gathered her X-Men to decided to attack Genosha.[1]

As Triage and Rogue cured the inflicted of the Extinction Virus, Baron Summers and her X-Men launched their attack. During the fight between the X-Men and the Press Gang, it was discovered that scientist Dr. Aldus Kluge was using Triage's healing power to resurrect Cameron Hodge, the former leader of the anti-mutant government that used to govern Genosha. Press Gang member Bulletproof killed Kluge in retaliation.[2]

Despite Kluge's death, Hodge's resurrection was successful. Empowered by the Transmode Virus that was taken from Warlock and an Adamantium skeleton, Hodge easily overwhelmed the X-Men and Press Gang. Hodge was eventually stopped when X-Man Bombshell and Press Gang leader Havok combined their powers in a massive explosion while Press Gang member Wolfsbane crashed the X-Men's Blackbird into Hodge.[3]

Retrieved from "https://marvel.fandom.com/wiki/X-Men_(Earth-24201)?oldid=6020343"
Community content is available under CC-BY-SA unless otherwise noted.