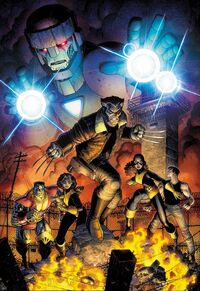 The X-Men were torn apart as a team as the Mutant Control Act was passed, leading to mutants and other superhumans to be contained in camps, where they were sterilized and used for experiments. The streets of the United Doomstates were constantly patrolled by Sentinels. Those that remained were scattered to the four winds. X-Men Colossus, Ariel, Phoenix, and Magneto were held in the South Bronx Mutant Containment Center. Colossus and Ariel would later give sire a child, "Chrissie".

To keep their companions alive, Ariel and Chrissie were forced to help the government hunt down unregistered mutants. Secretly, however, the pair slowly collected chemicals to rid themselves of the mutation-suppression collars they were forced to wear. During a search for the last needed chemical, Chrissie ran into former X-Men Wolverine who was then taken to the Containment Center. Also being held in the Containment Center was Wolverine's son Cameron Logan.

Eventually, Phoenix and Chrissie broke free from their collars and help their companions escape as Sentinels bore down upon them. The X-Men then encounter the mutants Mystique and Blob who had been manipulated by President Kelly into attacking the escaping mutants so the public would be convinced that mutants were still a threat and that the Mutant Control Act should remain.[1]

During the fight, Cameron killed Blob. As more Sentinels started to come, the X-Men and Mystique were forced to flee together. They fled to Centrum, an underground refuge for mutants, where they reunite with X-Men Storm and Angel. A downed Sentinel was examined, and the X-Men discovered that it was reprogrammed by President Kelly to fabricate an assassination attempt on him so he could blame mutants for it. Then Sentinels smashed through Centrum's ceiling after finding it. Chrissie decided to call upon Centrum's final line of defense to halt the Sentinels' attack, a giant-sized Lockheed.[2]

While Lockheed dealt with the Sentinels, the X-Men escape Centrum. During the escape, Chrissie accidentally told Cameron that he wasn't Wolverine's son but really the son of Colossus and Ariel. Wolverine had adopted him when he was a baby after his parents were captured by Sentinels. Ariel took her two children to Doom Cathedral in Coney Island, which was ran as a sacred place by former X-Man Nightcrawler. The four decided to help liberate mutants being held in a nearby internment camp and take them to the cathedral. However, when they enter the camp, they fell into a trap set up by the mutants by Pyro, Avalanche, and Destiny and the United Doomstates Army sent by President Kelly.[3]

Chrissie convinced the mutants being held to rise up and fight. This allowed Chrissie and her companions to kill Avalanche and subdue Pyro. The rest of Destiny's and Kelly's forces were defeated when Magneto arrived controlling the Sentinel examined in Centrum as a weapon. It was then discovered that Magneto and Phoenix had reprogrammed the Sentinel with the DNA sequences of Chrissie and Cameron. This way, the Sentinel would target the pair and kill them so they would become martyrs for the mutant cause. When confronted, Magneto took Chrissie hostage and fled with the Sentinel. However, Cameron snuck into the robot and killed Magneto. After the Sentinel fell to the ground, Chrissie argued with Cameron over killing Magneto. Cameron revealed that he had become self-loathing as a mutant and even believed the world would be a better place without mutants. Cameron now planned to use the Sentinel to try to assassinate President Kelly and force him to finally kill off all mutants once and for all. Chrissie opposed this and fought Cameron.[4]

Cameron was forced to flee and challenged Chrissie to to stop him at the National Plaza in Manhattan. When Cameron arrived at the Plaza, the X-Men had already forced Air Force One carrying President Kelly to land. Cameron entered the plane and took Kelly hostage. Chrissie later arrived while riding Lockheed with Wolverine and Ariel. While the X-Men fended off Sentinels and Kelly's troops, Chrissie got Kelly to safety with Lockheed and asked him to rethink the Mutant Reform Act. Using Lockheed's fire, Chrissie heated up her metal blades and confronted her brother for the last time before killing him. After the dust settled, the X-Men fled the scene and returned to Nightcrawler's church. Kelly's forces asked for permission to fire at them, but he ordered them to stand down. Once the mutants arrived at the church, they heard helicopters and sirens coming unsure if they were friend or foe.[5]

Retrieved from "https://marvel.fandom.com/wiki/X-Men_(Earth-25158)?oldid=3786263"
Community content is available under CC-BY-SA unless otherwise noted.