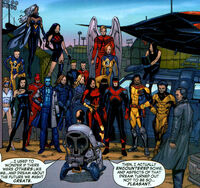 The Story begins with Aliyah, an heir to the Shi'ar throne and the daughter of Lucas Bishop and Deathbird (the princess of the Shi'ar Empire and sister to Lilandra), in her sentient ship, the Starjammer (which is inhabited by the spirit of Carol Danvers). Aliyah is flying through space when she witnesses a Kree dreadnought entering orbit around a planet. Deciding to investigate, she lands on the planet to discover that the coalition of the Slavers (multi-dimensional traders of everything) have brokered a deal with the Kree for the Phoenix Egg, which the Kree hope to use against the Shi'ar. Realizing the danger to her people, Aliyah knows that she must warn the Shi'ar, but she is attacked by the Slavers' brainwashed mutant-bodyguards, the Hounds. Just as that happens, Shi'ar warships appear in space and start attacking the Kree ship in orbit. The Kree on the planet attempt to flee, when it is revealed that one of their troops is a Skrull agent, who proceeds to blow the Kree landing-transport out of the sky. Just then, as the Slavers' decide to make a hasty retreat through their inter-dimensional portal, Brood eggs begin to land and hatch on the planet, killing any remaining Kree troops and going after Aliyah. In the meantime, the Phoenix Egg hatches, revealing Jean Grey, the previous bearer of the Phoenix Force. Jean Grey helps Aliyah escape onto her ship, saving Nightcrawler's enslaved alternate reality daughter, Nocturne, in the meantime. Both the Shi'ar and the Brood are apparently after a new stargate network.[citation needed]

Aliyah forces her ship to jump to warp inside the planet's atmosphere, which destroys the planet, and its star, and all ships in orbit. Jean Grey saves the Starjammer by manifesting the Phoenix Force. This discharge is noted by several parties: Scott and Emma Summers and their four children; Rachel Grey, campaign manager for Kitty Pryde's Chicago mayoral election campaign; Professor X; Cable; Logan and Storm, living in a house in Kenya; and Mr. Sinister, who notes that all the pieces are finally back on the board to allow him to restart his plans for world domination.[citation needed]

It is revealed that Mr. Sinister had himself made a deal with the Slavers for the Phoenix egg, and he becomes rather upset at the Slavers' representative for forgetting all the help he had given them with genetic samples of mutants (including the X-Men). Sinister sends his minions (Shaitan, Divinity, Technarx, Shakti, and Scalphunter) to kill most X-Force members, including Cable - seemingly succeeding in killing all but a few (Feral, Rictor, and Domino survive). Cable is infected with a techno-organic virus (via Technarx) that he cannot resist.[citation needed]

Shi'ar Empress Lilandra orders Phoenix destroyed once more. Her Lord Chancellor makes his own plans and orders the X-Men killed once and for all, and sends shape-shifting Warskrulls to Earth. Warskrulls attack every X-man on Earth, including Storm and Logan in Africa, Emma Summers and Rogue in California, and Iceman and Sage in X-Corp headquarters.[citation needed]

Emma and Rogue survive only to realize that Rogue's home has been attacked and both Emma's (and Scott's) and Rogue's (and Gambit's) children have been taken, apparently by Mr. Sinister, with Gambit seemingly betraying his wife and team to deliver the children to Sinister in person.[citation needed]

The first series ends with an attack on the Xavier Institute by Stryfe, Genesis, and Madelyne Pryor, all of whom turn out to be Warskrulls (except, as revealed only in Book 3, Madelyne). As the X-Men at Xavier's try to defend themselves, the deaths of many students and staff ensue and the mansion is once again destroyed with an explosion so large that it takes a large area of the landscape and all of the mansion's lower levels with it. Only a few students and X-Men escape.[citation needed]

Where the estate once resided has been replaced with a mile-wide crater. Northstar, having saved Cyclops, dies from internal injuries. It is revealed that he joins the rest of the original Alpha Flight in the hereafter. Kitty Pryde, who is now falling behind in the polls, returns to Chicago, IL, to continue her campaign for mayor. The X-Men and their allies quickly regroup but they almost immediately all come under attack by the next wave of Warskrulls. During the strategic attack on all of the various groups across the globe, the Skrulls are barely repelled (but not without heavy losses).[citation needed]

It is revealed that Sinister wants Rogue's and Emma's children as genetic stock for the future, since he has concluded that the X-Men are done for.[citation needed]

In space Nocturne is cured by Phoenix with the help of Nightcrawler, whom she brought aboard the Starjammer in the first book. It is revealed, in the process of freeing Nocturne's mind, that Lilandra (by brokering a deal with the Slavers for a Brood queen from a dimension where the Brood were not extinct) is responsible for the Brood returning to this dimension. Lilandra was able to accomplish this, in part, by allowing her captured sister to act as the host for the Brood Queen. Both Lilandra and the Slavers made this arrangement in order to defeat Khan, who threatened Lilandra's throne and the Slavers' trade routes in this dimension. Aliyah learns of this the hard way by wandering into a dark (i.e., depowered) section of her ship and being attacked by Deathbird/Brood queen (who was stowed away on the ship for years). In the resulting battle, Aliyah is forced to kill her mother (but not before Aliyah is infected by the Brood Queen, something that no one on board the ship notices when she returns to the bridge).[citation needed]

Cyclops sends Wolverine, X-23, M, and Marvel Girl to find Sinister, Gambit, and the missing Summers and LeBeau children. The group manages to find their way to Sinister's hidden base but are immediately immobilized by an attack from the Ladies Mastermind. All live out their fantasies until Wolverine, who is inspired by the astral form of Jean Grey to fight, does so. He breaks free of the mind control and helps the others break free. They all charge deeper into Sinister's base.[citation needed]

Gambit has indeed been faking cooperation with Sinister, only doing so in order to protect the children. After Sinister reveals his own history and the fact that Gambit is actually a clone from his and Cyclops's genetic makeup, Gambit decides enough is enough and goes to rescue his and Emma's children. As they make their escape, most of the children are teleported back to Earth, while Gambit and his daughter are teleported to the moon, near Sinister's mutant prison, Neverland. Rogue rescues her son and Emma's children from the place they got teleported to and is filled in by her son about what happened.[citation needed]

Back at Sinister's hidden base, Rogue has joined the fray (caused by Wolverine and others) and kills one of Sinister's minions. Before she can rejoin her loved ones, she is slain by Sinister who was masquerading as her husband, Gambit. Raven Darkholme arrives, revealing that she had been pretending to be the Dark Beast (who was in service of Sinister) all along, and extracts her revenge for the loss of her beloved daughter by finally killing Mr. Sinister. Gambit is able to use the portal to get back to Sinister's base just in time to see Sinister killing Rogue. They say their final farewell before Rogue dies. Gambit urges Mystique to finally meet her grandchildren and keep them safe. Gambit takes Sinister's place for a meeting with the true masterminds behind the attacks on the X-Men, the Shi'ar.[citation needed]

Book 2 comes to a close with Kitty debating her opponent, Alice Tremaine (head of the Anti-Mutant Purity Movement) and with her receiving the news that the X-Men are going into space to face the Shi'ar.

The X-Men (including Professor X and Magneto, in person) take the battle to the Shi'ar. It turns out that Khan (whose invasion of Earth the X-Men prevented in the pages of X-Treme X-Men and the reason why Lilandra tried to bring the Brood to this dimension, as mentioned above) is actually Lord Chancellor of the Shi'ar Empire, i.e., the administrator of law, with Lilandra being just the figurehead after being driven insane by Cassandra Nova. It was his plan to destroy the X-Men and kill Lilandra to get the Shi'ar throne. Gambit, however, instantly recognizes Khan - they battle and end up killing each other.

As the X-Men (Cyclops, X-23, M, Captain Britain, and a few others arriving through the wormhole created by Magneto and his daughter, Lorna) begin to battle Lilandra's guard on Chandilar (the Imperial Shi'ar throneworld), the Starjammer arrives in orbit. Storm, Iceman, and a few others form a Plan B contingent and fly to Chandilar in an X-Jet via a space portal.

It is revealed that Cassandra Nova is the mastermind behind everything. She has been hiding in Xavi, the son of Lilandra and Xavier, all this time. She begins to reveal herself to everyone involved, starting with Xavier (who, thinking she was inhabiting Lilandra, mistakenly kills her). On the Starjammer, the Brood eggs have multiplied thanks to Aliya and have begun landing on the Shi'ar home planet. Also, Cassandra reveals herself to the Phoenix through Aliya's mind. The Brood, having made a deal with Cassandra, begin attacking X-Men.

Cassandra Nova attacks the X-Men and the Shi'ar Imperial Guard. She then begins to erase Xavier's mind. Marvel Girl summons her residual Phoenix Force energies and engages Cassandra in psychic battle. Meanwhile Cable uses his vast telekinetic powers to fight Cassandra on the physical level, but succumbs to his techno-organic virus he was infected with as a baby and re-infected with in book one.

Jean Grey, once again the Phoenix, uses her powers to heal Cable, when, suddenly, she (and Cyclops) are killed by a psionic blast fired by a mind-controlled Marvel Girl. Cassandra's astral form leaps out of Marvel Girl's mind, and merges with the Phoenix Force. Cassandra begins killing the Imperial Guard, and Dazzler fires a laser beam through Cassandra's forehead, while Storm and Iceman hit her with their elemental powers. However, Cassandra rises from defeat and re-doubles attacks on the X-Men. Only Madelyne Pryor, who has been impersonating Dust (thanks to her black niqāb) all along, after killing her in Book 1, stands in her way. Madelyne reveals that she is the part of Jean Grey that loved Scott with all her heart, and that was the reason that Cyclops' and Jean's marriage failed. Madelyne turns into energy and fuses with Jean Grey, who awakens and heals Cyclops.

As Jean Grey (still able to access some of her Phoenix powers) and Nova fight, Psylocke enters the fray and plunges her psi-katana in Cassandra's brain, immobilizing her. Jean Grey tells Cassandra that they are all going to transcend reality. Jean resurrects all of the defeated/dead X-Men, bringing some with her to become one with the universe while bringing others back to Earth. Xavier and Cassandra admit that they are scared of each other, and Jean tells them that this is part of being human. Then, she and the resurrected X-Men form a giant Phoenix and become part of the universe itself.

The remaining X-Men not part of the Phoenix are seen 20 years later, when Katherine Pryde becomes President of the United States. She disbands the X-Men, saying that the X-Men were their own worst enemy, and that it was time for something new. She emphasizes this is not an end, but a beginning.

Retrieved from "https://marvel.fandom.com/wiki/X-Men_(Earth-41001)?oldid=5552644"
Community content is available under CC-BY-SA unless otherwise noted.