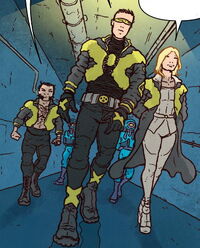 After mutants became the dominant species, the X-Men became a large and popular group in Mutopia. When Cassandra Nova attempted to wipe out mutantkind with the X-Men's mutant detector Cerebra, her brother Professor X, the leader of the X-Men and of mutantkind itself, was forced to kill himself to stop her. X-Man Jean Grey was psychically linked with Professor X when this happened, and the psychic backlash knocked Grey into a coma and trapped her in a Phoenix Egg along with the Phoenix Force.

After Professor X's death, Magneto became the new leader of the X-Men and of mutantkind. Though mutants were the dominant species, Magneto was unsatisfied and felt humans hadn't fully accepted mutants' dominance yet.[1] To make humans fully submit, he placed the Phoenix Egg containing Jean Grey and the Phoenix Force in a machine in the basement of the Atom Institute. Using the machine, he began creating Mutant Growth Hormone to increase the powers of the Xavier Institute to increase their powers so he could turn them into own personal team to carry out his goals. Feeling the older members of the X-Men wouldn't accept his goals or methods, he used the machine to suppress their powers and make the doubtful of their abilities.[2]

Magneto also wanted to awaken the Phoenix Force within the Phoenix Egg for his own use by using mutant students Kid Omega and Esme Cuckoo, both powerful psychics, to stimulate the egg with psychic power into hatching. What Magneto didn't know was that Kid Omega was an informant for X-Man Cyclops who was suspicious of Magneto's activities. When Kid Omega informed Cyclops that Magneto had the Phoenix Egg containing Jean Grey and what he was doing with it, Cyclops was forced to act. He gathered Emma Frost and Wolverine from the X-Men and released the mutant villain Xorn from prison to launch a rescue mission.[1]

While the old X-Men fought Magneto's X-Men at the Atom Institute, Kid Omega confronted Magneto about what he was doing. In anger, Magneto killed him with a metal tendril. However, Kid Omega had secretly bonded with the Phoenix Egg, causing it to hatch. Xorn then emerged to destroy egg before it could fully hatch and engaged in battle with Magneto. Their battle ravaged the Atom Institute. When Xorn sensed something else within the Phoenix Egg other han Jean Grey, he decided to leave. The egg then went dormant and fell on top of Magneto, killing him.

X-Man Beast later arrived to investigate a mysterious viral infection that was being drawn to the Atom Institute and commented that Magneto was wrong in thinking that a great power slept within the Phoenix Egg. Suddenly, an army of alternate versions of Beast appeared with one explaining that he was wrong.[2]

The army of Beasts were organized by Sublime, a sentient bacterial lifeform that lived within the Phoenix Egg and used by Magneto for his own ends. To get back at Magneto for using him, Sublime infected Beasts all over Battleworld and mentally commanded them to come to Mutopia to retrieve the Phoenix Egg so he could use its power. The old X-Men and Magneto's X-Men were forced to work together to fight off the Beasts. Sublime was finally stopped when the disembodied mind of Xavier took control of Kid Omega's body and used his psychic power to destroy Sublime. As the threat from Sublime was fading, the Phoenix Egg suddenly hatched, and Jean Grey emerged bonded with the Phoenix Force but also possessed by Cassandra Nova.[3]

Cyclops tried to reach out to Jean, but Nova had Jean kill him on the spot. Nova then used the power of Jean and Phoenix to take control of Sublime's army of Beasts and most of Magneto's X-Men. Professor X managed to protect a few X-Men from Nova's control, but the others lost hope and were quickly defeated. Wolverine then came up with a plan and allowed Professor X take control over his body. When Wolverine's help, Professor X managed to get through to Jean and defeat Nova again while Wolverine and Jean killed themselves, taking Nova with them. The Phoenix's death unleashed a massive explosion that wiped out all of the old X-Men except for Beast, all of the Beasts gathered by Sublime, and many of Magneto's X-Men. Then Xorn emerged from ruins of the Atom Institute while possessed by Jean Grey and was now the new host of the Phoenix Force.[4]

Retrieved from "https://marvel.fandom.com/wiki/X-Men_(Earth-55133)?oldid=5681397"
Community content is available under CC-BY-SA unless otherwise noted.