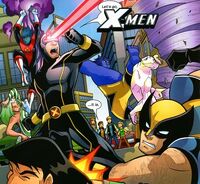 The history of this incarnation of the mutant superhero team known as X-Men most likely mirrors that of their Earth-616 counterparts. Like the Earth-616 X-Men, they are based at Xavier's Institute.

The young superhero team Power Pack ran into both individual members of the team, and the team as a whole, on several occasions. The first time the entire team was seen together was when the X-Men fought the Marauders. Power Pack tried to help, but only ended up getting in the way, causing the X-Men to lose the battle. They made up for their mistake later on by rescuing Cyclops from the Marauders.[1]

The team was seen again when Wolverine invited Power Pack over to Xavier's Institute. This time, Power Pack helped the X-Men defeat a group of Sentinels.[2]

Retrieved from "https://marvel.fandom.com/wiki/X-Men_(Earth-5631)?oldid=5552657"
Community content is available under CC-BY-SA unless otherwise noted.