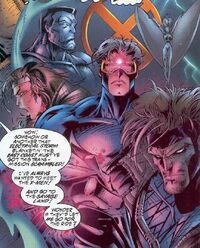 We're also fighting for acceptance with humanity every day... yet every day we also pledge to defend humanity from danger.

The X-Men seemingly had a similar history as its Earth-616 counterpart. They were formed and led by Professor X.

During a period where Professor X was believed deceased, the X-Men relocated to one of Angel's estates: Eagle's Nest, Madripoor. While on a trip to Sydney, Marvel Girl uncovered a plot by the brood and daemonites to dominate the world. She called her teammates for back-up and they found her aboard Heaven's Wave. Together with Grey's allies, S.H.I.E.L.D. agents Deadeye and Zealot, they stopped the production of Brood-Dameonite Hybrids, seemingly ending the aliens alliance.[2]

Cerebro detected a Mutant near the Hellfire Club, only to immediately vanish. They stationed Nightcrawler outside the club to gather information on estate owner Cameron Blair. During his investigation, Kurt was attacked by Warblade, who mistook him for a daemonite. Their fight attracted Hellfire guards. The heroes teamed-up after one revealed himself as a daemonite. Reno teleported away before answering any of Kurt's questions. He then teleported back to base and reported the encounter to his fellow X-Men.

They accompanied Nightcrawler on his scouting mission, but were spotted by the guards. They defeated them with the help of the WildC.A.T.s. The X-Men allied with the WildC.A.T.S. to rescue the missing boy. Nightcrawler found him and captured WildC.A.T.S. in a cavern under the house, where Blair had summoned the Lord of All That is Not. They rescued the kidnapped, but preventing the lord from receiving its sacrifice resulted in an explosion. Phoenix and Void contained the blast and the heroes escaped the mansion.[3]

The X-Men were manipulated by Darkseid into dreaming and seeing visions of their former teammate, Phoenix. They then visited Grey's House and found that her parents, Elaine and John Grey, also had dreams and visions of her. Professor X that there were strange incidents had occurred where the Jean had used the Phoenix Force's powers. Following the trail, the X-Men encountered Deathstroke the Terminator and while they were able to destroy the Psi-Phon , he defeated and captured them.

They were taken to the Source Wall, where Darkseid used the Psychon-Wave to resurrect Dark Phoenix. The villains left, and the X-Men teamed-up with the Teen Titans, who had been captured due to being at Professor Charles Xavier's School for Gifted Youngsters. Cyborg discovered an abandoned Mobius Chair and, after Changeling and Sprite accidentally figured out how it worked, the two teams returned to New York City. They followed the villains to their base and during the ensuring battle, Raven and Professor X psychically weakened the Phoenix-entity so that it was forced to possess the body of Cyclops to survive. Reunion with her former lover returned Phoenix's memory of her life as Jean Grey, and she turned on Darkseid in revenge for his having reawakened her from death. In a mammoth explosion, both Darkseid and Dark Phoenix vanished.[1]

Wolverine and Psylocke ran into one another when they independently investigated a sentinel attacked on a Hand stronghold. Finding the situation odd, the two decided to track down the sentinels. Logan followed their scent to a underground lair with Cyblade and Ripclaw held captive. They freed them only for the sentinels to attack them. The four heroes were able to destroy the sentinels before going their separate ways.[4]

Retrieved from "https://marvel.fandom.com/wiki/X-Men_(Earth-7642)?oldid=5552685"
Community content is available under CC-BY-SA unless otherwise noted.