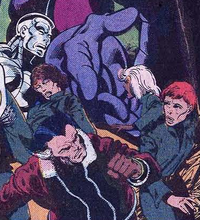 By 2013, all the surviving X-Men lived in the South Bronx Mutant Containment Facility, save for Wolverine, who was part of the Canadian resistance movement. He managed to break out of the concentration camp the rest of the group, while Kate Pryde transferred her consciousness back through time into Ariel, hoping to change their future and save the world from a nuclear armageddon[1].

While Rachel Summers watched over Kate's unconscious body, the X-Men infiltrated the Baxter Building, the Sentinels' continental nerve center, but Storm and Wolverine were eventually killed by the robots[2].

Although the plan to change history was ultimately unsuccessful, Kate Pryde, recreated as the dimension-hopping Widget, eventually brought to Earth-811 the British super-team Excalibur, which succeeded in reprogramming the Sentinels to protect all life rather than persecute extranormal people, effectively ending their reign of terror.

Retrieved from "https://marvel.fandom.com/wiki/X-Men_(Earth-811)?oldid=4475578"
Community content is available under CC-BY-SA unless otherwise noted.