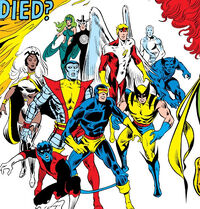 The X-Men fought the Shi'ar Imperial Guard on the Blue Area of the moon for the life of Jean Grey. Unfortunately the X-Men lost the battle and they were taken to flagship of the Shi'ar fleet where Cyclops was unable to prevent a psychic lobotomy being performed on Jean which destroyed the portion of her brain that her mutant powers resided in.

Later when Lilandra contacted the X-Men to save a planet named Arama from being destroyed by the planet eater, Galactus, Cyclops voted against it due to the actions of Lilandra towards Jean. Jean was shocked by his reaction and demanded that the team do what it could to help the doomed race.

As the X-Men fought Galactus' herald, Terrax the Tamer he struck them all down, almost killing Cyclops, which awoke the Phoenix Force inside Jean, transforming her once again into the Phoenix. She soon joined in the battle and soon stripped Terrax of his portion of the Power Cosmic leaving him only a naked broken man. She then attacked Galactus directly and drove him from the planet, saving the Aramans in the process.

Soon the X-Men returned to their normal lives, however, Jean eventually began to loose control of the Phoenix force once again, which horrified the other X-Men. As they confronted her over her consuming a star with inhabited planets Jean transformed into Dark Phoenix and battled the X-Men and killed each of them one at a time.

After all the X-Men were dead, especially her lover, Cyclops, the Dark Phoenix persona became dominant and eventually destroyed the entire universe.[1]

Retrieved from "https://marvel.fandom.com/wiki/X-Men_(Earth-81727)?oldid=5552702"
Community content is available under CC-BY-SA unless otherwise noted.