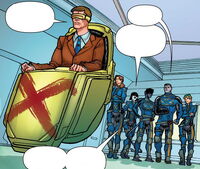 When demons rose up from Limbo and invaded New York City, the X-Men were able to secure a part of the city and prevent it from falling into the hands of the demons, who were led by Baroness Darkchild. The area guarded by the X-Men was ruled by the X-Men's leader, Baron Cyclops.[1] Every year, Cyclops sent a force of X-Men led by Darkchild's brother Colossus into the demon-ruled area to rescue Darkchild from the demons, but the force was never successful.[2]

One such excursion turned into a disaster as Colossus and his team were defeated. Nightcrawler was captured by Darkchild, Boomb-Boom was badly injured and taken prisoner by Mister Sinister, and Colossus and Domino were captured by the Goblin Queen, the former baroness of the domain[3] and who still ruled a part of the city with a army of goblins.[3]

Wanting to reclaim the domain as her own, Goblin Queen made an alliance with Colossus; in exchange for her help in defeating Darkchild, she would become the domain's baroness again. To aid Colossus, she handed him his sister's old Soulsword. Meanwhile, Darkchild ripped the soul of Nightcrawler's body and transformed him into a demonic monster, the Bamf Dragon.[3] With Nightcrawler under her control, she used his mutant teleportation power to transport herself and demon armies into the X-Men's territory and remove the force field that seperated their territory from hers.[1]

This allowed Darkchild to take control of the X-Men's territory and become the official ruler of the domain. The X-Men were forced to flee into the New York Sewer System where they were discovered by Nightcrawler who used his teleportation power to transport N'astirh and other demons there to kill them. The X-Men were fortunately then saved by Colossus and the remnants of his team as well as the Goblin Queen and her goblins. After the rescue, Mister Sinister approached them. He was accompanied by Boom-Boom and succubus clones he crated from her genetic material. Sinister wanted to form an alliance with the X-Men and Goblin Queen to overthrow Darkchild.[4]

Goblin Queen didn't want to work with Sinister and forced Boom-Boom to kill Sinister. This enraged Sinister's succubi, causing them to attack them. Then Darkchild appeared with her army of demons and attacked the X-Men. The majority of the X-Men were killed; only Colossus, Domino, and Boom-Boom were able to escape. Colossus was forced to confront his sister and fight her with the Soulsword Goblin Queen gave him. With motivation from Domino, Colossus managed to kill Darkchild. Using demonic power his sister earlier infected him with, Colossus teleported himself, Domino, and Boom-Boom out of the domain for good.[5]

Retrieved from "https://marvel.fandom.com/wiki/X-Men_(Earth-91240)?oldid=5605049"
Community content is available under CC-BY-SA unless otherwise noted.