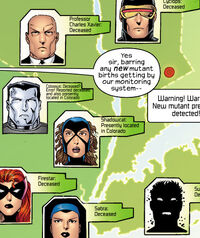 The X-Men were killed by Sentinels in the destruction of the X-Mansion just prior to Weapon X arriving on Earth-94831. Shadowcat was the only one to survive, even though she herself is later killed as she ran out of oxygen after being blasted of into space by Hyperion.

Their deaths caused the Avengers to rebel against the government, which resulted in the Sentinels killing them as well (with the exception of Hawkeye who survived and was put into an ambulance).

The phile photos of the members were displayed on a view-screen in the Sentinel Core Mold, located in the Pentagon.

Retrieved from "https://marvel.fandom.com/wiki/X-Men_(Earth-94831)?oldid=5223935"
Community content is available under CC-BY-SA unless otherwise noted.