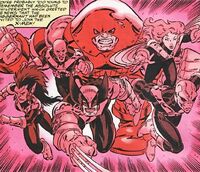 The X-Men were a superhero team consisting of mutants who represented peace between mutants and humans. The X-Men apparently saved the world some time in the past and because of this mutants became more widely accepted. After that the X-Men disbanded, and former member Jubilee decided to start a new version of the X-Men (her "X-People"). The X-People continue to carry out the heroic ideals set by the X-Men.[1]

Retrieved from "https://marvel.fandom.com/wiki/X-Men_(Earth-982)?oldid=5552763"
Community content is available under CC-BY-SA unless otherwise noted.