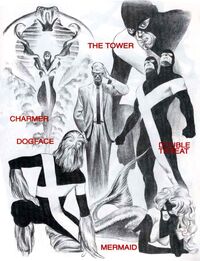 Base of Operations
Wakandan colony in the Savage Land; formerly an abandoned warehouse in New York; Daredevil's circus on the west coast
Affiliations

Origin
The origin of the X-Men matches that of their Earth-616 counterpart. However, the most recent team was created when Captain America sent Daredevil's circus troupe to New York City to seek training from Scott Summers, who was formally the X-Man named Cyclops (see history.)

Prior to the major events of Earth-9997, much of the X-Men's past matches that of their Earth-616 counterparts in many ways. The team was originally formed by Charles Xavier who had a dream of humans and mutants co-existing in peace. He formed the X-Men to combat evil mutants as well as to combat prejudice against mutants.

When the Terrigen Mists began to mutate the population of the entire planet, the X-Men soon disbanded because their cause was no longer a problem in society. Further dissolving of the team occurred with the psychic birth of the Skull, whose powers (once they were awoken by the Terrigen Mists) caused a psychic backlash across the astral plane that killed most of Earth's telepaths including X-Men founder, Professor X. The following is a list of the fates of a number of X-Men members on Earth-9997

When Captain America was gathering forces to oppose the Skull's march across the United States, he had sent the members of Daredevil's circus troupe ahead to New York City to seek training from Scott Summers, the former X-Man known as Cyclops.

This group found Scott Summers in Central Park in New York City, just as he finished speaking with his father Corsair (who contacted him via video transmission with his brother Havok and Polaris). The group attacked Summers to "show" him that they knew how to fight, but they were easily defeated by the former X-Man. After their defeat they explained to Summers that they were sent to him by Captain America to be trained to be the next X-Men.

Summers (now insisting his students call him Mr. S) had costumes created for the team and began training them in an abandoned warehouse for their coming battle with the Skull.

Following the defeat of the Celestials and the lighting of the first Human Torch to the rebirth of Mar-Vell and the start of his quest three years later, this new team of X-Men's whereabouts are unknown. It can be assumed they spent most of this time training under the tutelage of Mr. S. At some point during this time, Charmer developed a crush on her teacher, however these feelings were not returned as Mr. S still held feeling for the long dead Phoenix.

After the death of Captain America, the X-Men joined with Thor, Hulk & Banner and Venom in aiding Mar-Vell in his quest to collect items of power to aid in his quest to destroy Death. The first traveled with Mar-Vell to the Human Engineering Life Laboratory, to collect Psycho Man's emotocaster which was trapped between the Prometheus Pit and the remains of the Man-Thing. They later traveled with Mar-Vell to Egypt where they aided Moon Knight in holding off the armies of Set while Mar-Vell claimed the Reanimator Stone from the Temple of Konshu. After the stone was claimed, Moon Knight and his combatants all crumbled away to dust.

Finally, they raveled to Wakanda where Mar-Vell asked the Black Panther for the Cosmic Cube. After a battle with the Wendigo, Black Panther turned the Cube over to Mar-Vell when he realized that he was subconciously using it and that it was his wishes that created the Ani-Men he worshiped.

The X-Men stayed in Wakanda to aid Black Panther and his nation move from Wakanda to the Savage Land to get away from the Wendigo who were constantly attacking. The X-Men along with the Hulk and Bruce Banner provided as additional defense against the Wendigo during their dangerous trek.

Eventually the group made it to the Savage Land, where with the help of Ka-Zar and the Ani-Men, they managed to kill all the Wendigo and learned that Wendigo was really Madrox the Multiple Man, the former aid of the Beast who though that Madrox was the Wendigo's first victim.

Once the Wendigowere defeated, the X-Men aided the Wakandans in building a new home in the Savage Land. Sometime later they were attacked by Belasco and an army of Dire Wraiths. They were later saved by Mar-Vell, Venom, Kyle Richmond, Him, and Thor. They were transported to New York to aid in the battle against the Absorbing Man who literally absorbed all of New York City.

Upon Absorbing Man's defeat, the X-Men returned to the Savage Land where they made peace with Magneto (whom aided in battling Absorbing Man) and continued their training.

Later after Death's death, Mr. S and the X-Men were last seen in Latveria where they have been aiding the suffering that cannot die.

Retrieved from "https://marvel.fandom.com/wiki/X-Men_(Earth-9997)?oldid=5552770"
Community content is available under CC-BY-SA unless otherwise noted.