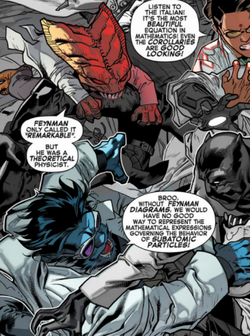 The scientists of the X-Men, Beast and Broo, were part of a brawl with the scientists of the Avengers, the X-Club and Leonardo da Vinci, seemingly launched because of a scientific dilemma and the necessity using or not Euler's identity to solve it, but also about the quality of that equation, and the works of the well-known physicist Richard Feynman.[1]

Dr. Nemesis and Madison Jeffries fought Giant-Man and Jeffries also restrained Leonardo da Vinci, both mocking Giant Man for his use of the Euler's identity, while Dr. Kavita Rao was fighting against Iron Man and supporting da Vinci's admiration of Euler's equation.[1]

Broo himself was also targeting da Vinci, while despising Feynman, and being verbally reprimanded by Beast who was duelling with the Black Panther, who was mocking them for having let Wolverine rule the Jean Grey School.[1]

Retrieved from "https://marvel.fandom.com/wiki/X-Men_(Earth-TRN338)?oldid=5552780"
Community content is available under CC-BY-SA unless otherwise noted.