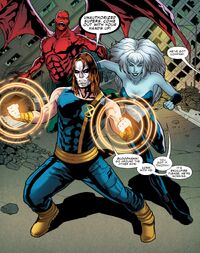 Mutants have spent their entire existence being shunted to one side. Being prosecuted. When the government comes to them and offers them a means of leading normal lives, why wouldn't they come aboard.

The X-Men had a similar history as its Earth-928 counterpart. After the passing of the Anti-Powers Act, Cerebra left the team while the remaining members abided to the law by joining S.H.I.E.L.D..

They were sent to apprehend a group of vigilantes hiding in Downtown, but were forced to let them escape after Spider-Man threatened the life of Jake Gallows.[1]

Retrieved from "https://marvel.fandom.com/wiki/X-Men_(Earth-TRN590)?oldid=5171284"
Community content is available under CC-BY-SA unless otherwise noted.