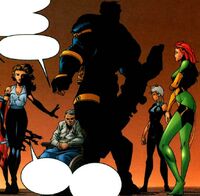 If there were never any X-Men, then there'd never be Sentinel technology.

The X-Men seemingly had a similar history as its Earth-7642 counterpart.

When the daemonites merged with the sentinels, they used their combined powers to take over the United States of America. By 2019, most of the X-Men had been either killed or imprisoned. Those that were allowed somewhat-free roam allied with WildC.A.T.s to defeat their captors. Lord Emp killed Warblade, which turned off his Inhibitor Implants. In his dying breath, Reno used his power to depower his compatriots' inhibitors. They then stormed the House of Ghosts and freed the rest of members. Using their combined abilities, they sent their astral projections back to the time of the kherubim's arrival on Earth and destroyed their scout ship. In the new timeline, the daemonites never infiltrated the planet.[1]

Retrieved from "https://marvel.fandom.com/wiki/X-Men_(Earth-TRN745)?oldid=5552804"
Community content is available under CC-BY-SA unless otherwise noted.