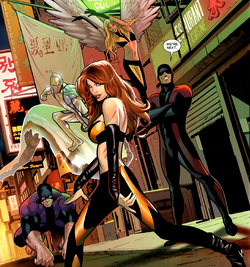 These "X-Men" were five young and rich people from San Francisco who wanted to be heroes. Passing through a selection process operated by Lobe's society, Sublime, they were chosen from among two thousands participants, and were each given the powers of one of the five original X-Men: Beast, Cyclops, Marvel Girl, Iceman and Angel.[1]

The "X-Men" were sent into town, operating as costumed heroes, as a promotion for Sublime products, proving themselves to be messy and unorganized heroes.[2]

When the true X-Men were battling the Collective Man, those impersonators came, intending to help their idols, but were soon knocked out by the Chinese mutant. The five of them were sent to the X-Brig of Utopia, and interrogated by the adamantium-poisoned Wolverine.[3]

After the attack on Sublime Corporation's inaugural of the Xperience, the "New X-Men" apologized, except for Penny Newsom who left without being noticed by anybody, with two inhalers, containing Emma Frost's and Jean Grey's powers[4].

Like this? Let us know!
Retrieved from "https://marvel.fandom.com/wiki/X-Men_(Lobe)_(Earth-616)?oldid=5552816"
Community content is available under CC-BY-SA unless otherwise noted.