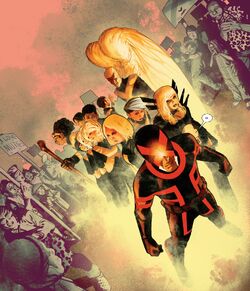 Origin
A division of the X-Men filled with some of the world's most powerful mutants organized by Cyclops and tasked with the mission to save humanity from extinction level threats. Restructured after AvX as a revolutionist team organized to save new mutants from human persecution.

Our last chance! Okay?! We have nothing left but threats! We fought for them and they hate us! We fought alongside them and they kill our children in the streets! We pack up and move to an island and they destroy it! We move to another one and the $#%&#$% Avengers storm the #$%& beaches! We're supposed to be the next step of human evolution yet we've become an endangered species. We're everything they are not and we're a shadow of our former selves! All we have left is threats. The threat of revolution! The threat of a fight that we hope they don't want! So, yes, I got in front of any camera that would show my face and I looked their world in the eye and told them--They better leave us alone... I stood on the bridge of the Helicarrier and I threatened them... Because nothing. Else. Has. Worked. Xavier is gone. Logan is gone. I watched Xavier die at my feet and I thought if I don't do something to kick-start it... The dream is really, truly dead.

Originally a division of the X-Men sanctioned by Cyclops and tasked with the mission to save humanity from various extinction level threats. This team roster included some of the most powerful mutants on the planet.[1]

The teams first major missions included protecting the Dreaming Celestial from Sinister,[2] attempting to save a small town from a lone Phalanx,[3] investigating Tabula Rasa,[4] aiding the Avengers in battling the Dire Wraiths,[5] and capturing S.W.O.R.D.'s escapee, Unit.[6]

The Extinction Team, along with the other Utopian X-Men, came into direct conflict with the Avengers when, fearing the imminent return of the Phoenix Force, Captain America arrived on Utopia demanding to take Hope Summers into custody. Battle broke out ending with Hope's escape and the X-Men's retreat.[7][8]

While on the run, Cyclops discovered Hope was heading to the Moon to meet the Phoenix head-on. Taking Magik, Colossus, Emma Frost and Namor, he headed to the Moon to aid her. Upon arriving, the Avengers ambushed the Extinction Team, and Iron Man attempted to disperse the Phoenix. Ultimately the attempt resulted in the Phoenix being split into the five present X-Men and the Phoenix Five were created.[9][10]

As the Phoenix Five, Cyclops and the others began to bring peace, prosperity and bounty to the world. Utopia became a sterling example of peace and began flying over the San Francisco Bay. They also began searching out and imprisoning the Avengers.[11][12][13] The Extinction Team and Phoenix Five even destroyed Sinister's clone army, Celestial machine and Sinister London in the Moloid Caverns.[14]

Unfortunately, the Phoenix Five soon became corrupted. Magik began torturing her Avengers prisoners with Limbo Demons she summoned,[12][15] Colossus began threatening loved ones,[16] Emma began policing individuals' thoughts, and Namor declared war between Atlantis and Wakanda.[17] Eventually, Namor lost his portion of the Phoenix when attacked with all the Avengers' firepower,[17] and Magik and Colossus lost theirs when they turned on each other.[15]

With only two Phoenixes left, Cyclops, fearing the Chaos Magic of the Scarlet Witch and Iron Fist/Dragon Lord training of Hope Summers, turned on Emma taking her portion of the Phoenix and becoming Dark Phoenix. Cyclops killed Professor X before trying to end the world. He was only narrowly stopped by Scarlet Witch and Hope Summers dissipating the Phoenix energy and reigniting the mutant population around the world once more.[8][18][19]

After the murder of Professor X, Cyclops and Emma Frost were imprisoned separately, Psylocke and Storm turned themselves into the custody of the X-Men, Magneto, Namor[20] and Danger went AWOL, and Magik freed Colossus from Cyttorak before separate parting ways.[21]

Initially, Cyclops was content to remain a political prisoner or become a martyr.[2] However, when it became clear that the world's new mutant population needed protection, he ordered his own escape via Magneto, Magik and Danger. Now with Magneto and Magik, Cyclops is again ready to protect and save a world that now hates and fears him.[22]

Cyclops, Magneto and Magik go about liberating the unjustly imprisoned mutants and offering them aid with their powers and a place in Cyclops' new team. When attempting to liberate Emma Frost, Cyclops and Magneto lost control of their powers. Emma revealed that she was going through a similar problem and told them that the Phoenix had altered their powers. Magik revealed that her powers were changing as well, but for the better, as she had gained the ability to summon energies from Limbo atop of her existing powers.[23]

As Cyclops and Magneto left to find another new mutant, they were confronted by a younger Cyclops and younger versions of the other five original X-Men. While confronting the five young X-Men, the young Jean Grey lost control of her powers and tossed Cyclops away with her telekinesis. This caused Cyclops to lose his visor and he began firing optic blasts wildly, leading the young X-Men to believe that he was attacking them. Magneto disposed of them and ordered Magik to transport him and Cyclops back to headquarters. Cyclops later freed Emma and recruited more young mutants to his team.[24]

Later, the team was accidentally transported to Limbo by Magik due to her broken powers. After facing Dormammu, the team was able to escape but Goldballs left due to not being able to handle being an X-Man. After this, the team added David Bond to their ranks and gave him the code-name Hijack. Soon after, Fabio rejoined the team.[25]

Battle of the Atom

Later on, his team of X-Men encountered a team of X-Men from the future who told them they were here to prevent a disaster from happening because of the past X-Men being in the present time. After some investigating and meeting another team calling themselves the X-Men, it was revealed that the first former team were actually the future Brotherhood. During this time, the Stepford Cuckoos and the past Angel joined Cyclops's team. In the end, Scott's team and Wolverine's team defeated the future Brotherhood and the real future X-Men went back to their own time. Also, Kitty, Lockheed and the rest of the past X-Men left the Jean Grey School to join Scott's team because of Logan's actions and mistrust. After a mission Magneto left the team to do things on his own terms. After this, Hijack was kicked off the team after almost putting them in danger. After trying to adjust to a normal life again, he was interrogated by Maria Hill of SHIELD for the location of Cyclops's team. The team did rescue him and he, along with Dazzler rejoined them.[26]

After Scarlet Witch and Dr. Doom cast an inversion spell during a fight against the Red Onslaught, the moral compass of the heroes and villains present during the battle were inverted.[27] As a consequence of the inversion, both X-Men teams reunited in order to wage war against humanity.[28]

The inverted X-Men planned on using a gene bomb to kill everyone on the Earth who wasn't a mutant.[29] The Astonishing Avengers tried to stop them, and even though they were defeated in combat,[30] managed to prevent the bomb from fulfilling its purpose.[31] The Axis, the group of inverted Avengers, arrived to New York to kill the inverted X-Men. During the fight, a reinversion spell was cast by Doctor Doom and the Scarlet Witch, with the help of the inverted Red Skull, turning almost everybody back to normal. After the event, Cyclops' X-Men returned to Alberta, Canada.[32]

The X-Men were reached out by S.H.I.E.L.D. to investigate Utopia after a recon team went missing. The X-Men teleported to the island, and initially engaged the Utopians. After talking it out and discovering the Utopians wanted nothing but to be safe and undisturbed, the X-Men offered them a place at the New Charles Xavier School, which they gladly accepted.[33]

The Last Will and Testament of Charles Xavier

After the discovery of the Last Will and Testament of Charles Xavier,[34] it was revealed Charles had left all of his possessions to Scott.[35] Racked by guilt, Scott left all of those possessions to the Jean Grey School, decided to disband his group of X-Men, suggesting them to move to the Jean Grey School, and planned to turn himself in for the death of Charles.[36]

Cyclops has proposed a few heroes to join, in vain:

Retrieved from "https://marvel.fandom.com/wiki/X-Men_(New_Charles_Xavier_School)_(Earth-616)?oldid=5850671"
Community content is available under CC-BY-SA unless otherwise noted.