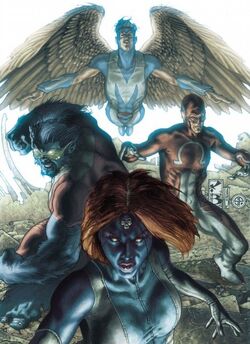 When Norman Osborn took over S.H.I.E.L.D. he hand-picked several former criminals to act as his own team of Avengers.

His X-Men performed a few missions against crime-lords and drugs-producers for some time.

Osborn dispatched his Avengers to police the streets and maintain the peace, but he had also secret recruited Emma Frost to lead a team of his own "X-Men". Just as with his Avengers, Osborn had hand-picked each member of his X-Men too. They included Mimic, Omega, Cloak, Dagger, Mystique posing as Professor X, and Daken as Wolverine. Osborn had also planned to recruit the former Alpha Flighter Aurora, but was unsuccessful. Emma agreed to lead the team as the Black Queen on one condition; that Namor the Sub-Mariner be added to the roster.[1]

The team was introduced to the public as the official "X-Men" maintaining high public approval through Osborn's careful media strategy. Conversely, the genuine X-Men were portrayed as a dangerous militia.[1]

During her brief time with Osborn, Emma discovered that Dark Beast had created a machine to torture apprehended mutants and channel their powers into Weapon Omega. Cyclops dispatched X-Force to Osborn's base on Alcatraz Island on a rescue mission and to confront Osborn's X-Men. As the teams prepared to battle, Emma and Namor revealed their roles as a double agents, and helped X-Force defeat Osborn's X-Men. Before departing, Emma offered an invitation to her former team to join the real X-Men. Cloak and Dagger were the only two to accept the offer and accompanied the X-Men to their newly created island base, Utopia.

After their failure in San Francisco, Osborn sent his X-Men to investigate a town in which most of its residents fell into a trance and the delusion that they were X-Men. It was there that the Dark X-Men witnessed the resurrection of Nate Grey, the X-Man. Discovering how corrupt the world had become in his absence and learning of Osborn's involvement, Nate rushed to Avengers Tower to confront him.

During the encounter Nate seemingly died, but actually took possession of Osborn's body. Osborn's will proved to be too strong for even Nate to contain and a psychic battled ensued. Mystique, realizing that Nate was possessing Osborn, decided to take her team into Osborn's mind to free him.

Inside Osborn's mind X-Man and the Dark X-Men encountered the Green Goblin, Osborn's evil alter ego. The Goblin managed to use Omega and Mimic's powers to siphon off Nate's psychic energies, weakening him enough to allow Osborn to regain control of his body. After the battle Nate was dragged off to the Omega Machine to be tortured and have his powers fed to Omega[2]

It remains unclear when this group disbanded. They did not participate in Osborn's Siege of Asgard, except for Daken, part of the Dark Avengers, so it is likely they went their separate ways before then.

Like this? Let us know!
Retrieved from "https://marvel.fandom.com/wiki/X-Men_(Osborn)_(Earth-616)?oldid=5552833"
Community content is available under CC-BY-SA unless otherwise noted.