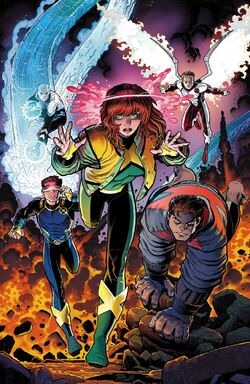 They'll do fine, these young X-Men. They've got great aptitude for the hardest lesson of all: How to be a hero.

The path of these X-Men seemingly followed the same of their present counterpart until the day when Beast from the future traveled to the past in order to inform them that the future was in a bad state, and that only these X-Men could help fix it. The team then accompanied this Beast to the future, where Cyclops had killed Charles Xavier, Jean was dead (and the school named after her), and Beast was dying from yet another mutation.[10] Beast planned the past Cyclops to meet his future counterpart and make him realize what he did become. The young Beast also managed to work alongside his future counterpart to help him survive his new mutation.[3]

Under the leadership of Kitty Pryde, the team decided to stay and resolve the problems of this time, before returning to their own, despite the protests of the young Angel.[2] After being lied to, having his mind partially wiped by Jean, and not being allowed to make decisions of his own, Angel had enough, and joined the present day Cyclops' X-Men.[11]

Sick and tired of being lied to and the way they had been treated after the events between Wolverine's group and the future versions of the X-Men and Brotherhood of Evil Mutants at Cape Citadel, Kitty decided to quit Logan's school and took herself and the younger X-Men to Cyclops' school instead.[12] The team subsequently rescued X-23 from a group of Purifiers that were attempting to capture her after her escape from Murderworld,[13] prompting the team to take Laura in as a new member after the Purifiers had been defeated.[14]

When Jean Grey was abducted by the Shi'ar Empire for the crimes of her future self and narrowly rescued by the team-up of the X-Men, the Starjammers, and the Guardians of the Galaxy - the same encounter seeing Jean manifest a new power combining her telepathy and telekinesis that she had never seen before - Cyclops decided to remain out in space to spend some time with his father, who he had just learned was alive.[15]

After defeating the time-displaced Brotherhood of the future, who were revealed to have been manipulated by Charles Xavier II,[16] the team was transferred into another universe by accident due to a new mutant's erratic powers,[17] culminating in a team-up with that world's Spider-Man and X-Men to save Beast from the local Doctor Doom before retrieving the mutant and returning to their world.[18] After reuniting with Cyclops while investigating the Black Vortex alongside the Guardians of the Galaxy, Scott rejoined the X-Men's ranks when they returned to Earth.[19]

Following the rise of anti-mutant hysteria and the beginning of the M-Pox crisis, the young X-Men decided to go separate ways and lay low for a while. Beast eventually reunited the team (with the exception of Jean Grey) and, joined by Evan Sabahnur and Idie Okonkwo, decided to go on a road trip across the United States, assisting crisis all over the world whenever it was needed, with the help of a teleporting Bamf named Pickles.[20]

Frustrated by his inability to find a way to bring himself and his friends back to their time, Beast decided to experiment with magic.[21] These experiments eventually made way for him to find a way to travel through time using the Third Eye of Horus, gifted to young Beast by Doctor Strange. However, Hank believed he had discovered that he had merely found a way to travel through time within the timeline he was currently inhabiting and not his own. Beast reunited the original five X-Men to show them in person his unfortunate discovery, and they witnessed what they thought was this timeline's young X-Men inhabiting the past they believed would've been available for them to return. The young X-Men then went back to the present and proceeded to look forward to their future, which would no longer be tied to their concurrent older selves.[22]

Faced with their new freedom from the 'need' to return to the past, the X-Men were soon contacted by Magneto, who wanted to use Xavier's original students to set an example for the world since he couldn't operate in the open due to his reputation. Even though the X-Men remained cautious of Magneto's ulterior motives, they agreed to work under his coordination, and moved their base of operations to an X-Mansion in Madripoor.[23] In secret, Magneto worked on a time platform with the intention to help the X-Men return to their original time.[24]

After a handful of adventures during which they recruited two stranded travelers from other realities, Jimmy Hudson and Bloodstorm, the young X-Men saw themselves directed by Magneto to use the time platform to travel through time after the timestream suddenly began collapsing.[25] The time platform took the X-Men through different time periods of an altered timeline in which the original five X-Men seemingly took over the world.[26] When the X-Men reached their original era,[27] they discovered the young X-Men they had seen when they checked up on their past were in realty impersonators, the Brotherhood of Evil Mutants from a future led by Charles Xavier II, who had hopped back in time to fill the void left by the young X-Men and in the process held Professor X captive.[28] After defeating the Brotherhood and forcing them to retreat, the young X-Men learned the Professor X from their time had managed to send a psychic suggestion through time to Magneto in the present, hence the reason why Magneto had built the time platform the X-Men ended using. Despite their desire to stay in the past, the young X-Men returned home, since in order to fully repair the damage caused by the Brotherhood to the timeline they would need to return at the exact moment they had left.[29]

The Poison Invasion and Mothervine

Following the capture of Corsair at the hands of the space pirate Killer Thrill, Cyclops rallied most of his teammates to rescue him. Since Killer Thrill was in possession of a symbiote, they first sought Venom's help.[30] During their pursuit, the X-Men temporarily bonded to symbiotes themselves. Unfortunately they stumbled upon the predatory Poisons, and Jean was seemingly assimilated by their Hive. After rescuing Corsair, Venom and the X-Men rushed back to Earth to warn about the Poisons' intention to invade the planet.[31][32]

During the X-Men's space adventure, an alliance formed by Emma Frost, Havok, Miss Sinister, and Bastion mobilized to release the Mothervine virus, a catalyst for artificial mutations as well as secondary and tertiary mutations, across the world.[33] Due to the absence of most of the young X-Men, Magneto's allies banded together to fill their void, including Polaris and Xorn.[34] The patchwork auxiliary line-up confronted Havok's cabal with Emma Frost's help, who turned against her allies, while Magneto neutralized Mothervine with Elixir's help.[35]

Venom and the X-Men returned to Earth right after the Hive had arrived. As part of their invasion plan, the Hive started infecting many superhumans with symbiotes in order to assimilate them afterwards.[36] One of the heroes assimilated by the Poisons was Jimmy Hudson.[37] When the heroes confronted the Poison Queen, Jean resurfaced since her psyche had survived the assimilation due to her powers. She killed the Poison Queen, causing a chain reaction that killed most of her subjects. One of the surviving Poisons was Jimmy,[38] whose original psyche survived the assimilation process, and struggled against the Poison's consciousness. The young X-Men tracked down Jimmy and tried to bring him back, but eventually left him alone so that he could figure out his duality between mutant and alien.[39]

The young X-Men quickly found out that Magneto had been pushed to his limits during the Mothervine crisis, and he vowed to once again advance his mutant agenda by any means necessary.[40] Erik additionally blamed his former pupils for abandoning him in a moment of need, arguing they shouldn't have gone away since he had warned them their enemies were close to striking. The X-Men intercepted Magneto in Paris and stopped him from killing Emma Frost, he only backed down because he knew the X-Men wouldn't give up either, and refused to risk their lives.[41]

Eventually, the displaced team were faced with the potential dark consequences of their time in the present when the mutant-hunter Ahab attacked, using various brainwashed mutants as his Hounds with the aid of a pair of telepathic mutant twins, who claimed to have come from a dark future that began when one of the original five had been killed. The other X-Men initially tried to protect the five, but were caught off-guard by the actions of a younger version of Cable, who killed his own future self in the belief that the older Cable had forgotten his purpose and went so far as to amputate Mimic's Angel-copied wings so that he could transplant them on to the displaced Angel and restore Warren's true appearance. After a close call where Mimic sacrificed himself to save Cyclops from Ahab's attack, the original five accepted the need to return to their time, but first made a detour to the point when Ahab's psychic twins were training at the school before Ahab captured them. The twins were thus able to not only teach Jean how to undo the brainwashing they would inflict on Ahab's Hounds, but also taught Jean how she could put a 'timer' on any memories she suppressed. As a result, once the team returned to the past just after Beast had departed with their past selves, Jean was able to wipe their memories of their time in the future but time it so that their present selves would regain their memories just after the younger team departed, thus restoring Jean's memories of how to undo the twins' brainwashing on the Hounds[42].

Retrieved from "https://marvel.fandom.com/wiki/X-Men_(Time-Displaced)_(Earth-616)?oldid=5850673"
Community content is available under CC-BY-SA unless otherwise noted.