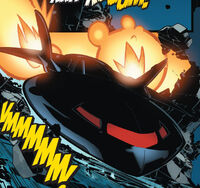 That's, like, the third blackbird we've lost in the last month.

The Blackbird is the X-Men's main source of conventional transportation. Professor Charles Xavier somehow gained at least one working version of the RS-150 Blackbird from S.H.I.E.L.D., after the X-Men's Stratojet had been destroyed by Count Nefaria.[1] Located in an aircraft hangar on the grounds of the Xavier's School for Gifted Youngsters, the Blackbird served the Professor and X-Men for many years. At some time, the Professor upgraded to the SR-71 Blackbird. The Devil's Rock was the exit and entry point for the X-Men's aircraft.[2]

After the X-Men were thought dead in Dallas, Texas, Nightcrawler, who had since joined Excalibur, teleported into the Skunk Works, a part of the Lockheed Aircraft Corporation, and started-up the SR-71 Blackbird, taking it back to England. [citation needed]

After an extended sojourn in space with the Starjammers, Professor Xavier returned to Earth and both the original and third teams of X-Men reassembled under his leadership. At this time, Prof. Xavier asked Forge, a mutant with an unusual talent for inventing mechanical devices, to upgrade the Blackbird and include Shi'ar technology, including a cloaking device which literally made the Blackbird invisible. The Professor also had Cerebro's, the X-Men's original machine used to detect mutants all over the world, software installed into the Blackbird, for non-telepathic use. Professor Xavier later had many Blackbirds built and filled the hangar.[citation needed]

After deciding that he needed to make a stronger presence, Professor Xavier regathered his X-Men as a public team and created the X-Corp. Professor X had new Blackbirds designed, ones with an "X" across the top (see X-Wing) of the jet. As Cerebro had become sentient and destroyed, Beast added Cerebra, Cerebro's more powerful replacement, to the Blackbirds.[citation needed]

After Kuan-Yin Xorn impersonated Magneto and destroyed the Xavier mansion, Beast rebuilt the sub-basement and Cyclops asked Angel to purchase new Blackbirds. Since the mansion's reconstruction, the exit and entry point for the X-Men's aircraft was relocated beneath the basketball court. Upon departure and landing, a klaxon will sound warning for anyone nearby to vacate the area. Students are advised to move immediately, once the klaxon sounds. Even after moving to Graymalkin Industries and later Utopia, these new Blackbirds have moved with the X-Men. It is presumed that the jets went to the Jean Grey School after the events of Schism.[citation needed]

The original Blackbird was designed and built by Hank McCoy in the early 60s, during his time working for the CIA. It was used to transport the newly-formed X-Men to Cuba in order to fight the Hellfire Club. It was heavily damaged by Riptide and crash-landed in Cuba.[5]

A new model was used later by Jean Grey and Storm used it to travel to Nightcrawler, then back to get Wolverine, Rogue, Pyro and Iceman. They flew to Alkali Lake's dam to save captured Xavier Institute students and to foil William Stryker's plan. When they were asked to stay, Rogue and Iceman waited in the X-Jet while Pyro abandoned them to join the Brotherhood of Mutants. Rogue and Iceman flew the X-Jet to save the X-Men and the captured mutants. Jean Grey stayed behind to counter the flood and sent the X-Jet to safety from the incoming wave from the broken dam.[7]

During Magneto's assault on Alcatraz Island, the X-Men used the X-Jet to travel there in stealth mode. When Jean Grey, now the Phoenix, unleashed her power, the X-Jet was disintegrated along with most of the island.[8]

By the year 2023, the X-Jet had already been rebuilt, apearing to be stealthy and fast enough that the Sentinels couldn't detect it. The X-Jet was used to transport Storm, Wolverine, Professor X and Magneto to meet with Free Mutants. Later when the Sentinels found them, Magneto lifted the jet and sent it flying into the Sentinels. Storm the shot a lightning bolt into it's engine, causing it to blow up, destroying hundreds of Sentinels in the process. But when the small number of Sentinels ambushed and annihilated the group, an injured Magneto used every last debris from the destroyed X-Jet to fortify the temple's door before retreating back inside through Blink's portal.[9]

Retrieved from "https://marvel.fandom.com/wiki/X-Men_Blackbird?oldid=5622893"
Community content is available under CC-BY-SA unless otherwise noted.