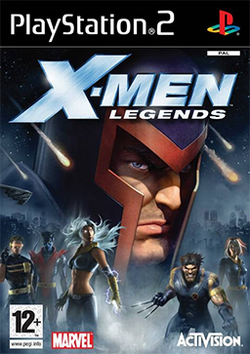 Alison Crestmere (Magma), a mutant on the verge of discovering her powers, is abducted. Wolverine witnesses the abduction and chases Mystique and Blob, teaming up with Cyclops to rescue Alison. After safely escaping in the X-Jet, Alison is brought to the Xavier Institute where she can talk with the X-Men and students, and explore her powers. The X-Men continue to explore leads that might indicate why Mystique and the Brotherhood of Mutants are interested in Alison. At the same time, they attempt to combat both the Brotherhood, who spring their leader, Magneto, from his prison, and the growing number of Sentinels. The drama culminates in a number of showdowns on Asteroid M with both Magneto and the Master Mold.

X-Men Legends is a role-playing game released on several consoles in 2004. Players can play as one of 15 X-Men characters, switching between four Computer (or Human) controlled characters within one team. The basic plot revolves around the X-Men battling Magneto and the Brotherhood of Evil Mutants.

The X-Men Legends series used the Ultimate costumes (and regular ones as well), but the storyline for the games are original for the most part. The backstories of the characters are based on the traditional Marvel continuity, known as Earth-616, but with several notable differences (Magma never joined the New Mutants, nor did she come from Nova Roma; Illyana Rasputin is still alive; Juggernaut and Mystique remain villains; etc).

There are no major Ultimate references, with the exception of the costumes.

X-Men Legends is available for the Xbox, PlayStation 2, and GameCube video game consoles and the N-Gage handheld game console. This action role-playing game allows up to four people to play (depending on the system) as one of 15 different X-Men, including characters such as Wolverine, Cyclops, and Storm, unlocked through gameplay. Each character has unique powers that can be used against opponents, as defense, or in combination with teammates' abilities. The game was developed by Raven Software with an overhead perspective. The N-Gage version was developed by Barking Lizards, and features an isometric viewpoint.

A sequel, X-Men Legends II: Rise of Apocalypse was released for the Playstation 2, Xbox, GameCube, and PC on September 27, 2005; a PSP version of the sequel was released on October 11, 2005, and an N-Gage version was released in late 2005.

The game has multiplayer co-operative and skirmish options for up to four players. Co-operative play is similar to Baldur's Gate: Dark Alliance 2, but is more refined with the addition of combination attacks and character interactions.

This format of a mission and then character development is followed throughout the game. While at the mansion, one person controls Alison as she explores and learns about herself and the other X-Men.

Like this? Let us know!
Retrieved from "https://marvel.fandom.com/wiki/X-Men_Legends?oldid=6462131"
Community content is available under CC-BY-SA unless otherwise noted.