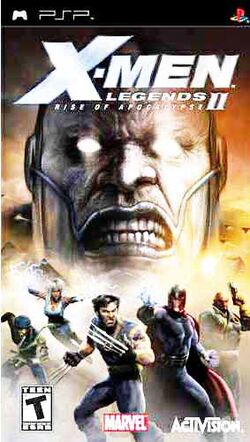 Apocalypse has begun his war on humans and mutants, beginning with his invasion of the mutant-controlled nation of Genosha. Professor X and Magneto come to the realization that the only way to defeat this enemy that threatens all life on the planet is for their respective groups to join forces. The story begins with the X-Men and the Brotherhood launching a rescue mission to save Professor X, who has been captured by Apocalypse.

In the following missions, the unlikely group encounter many dangers in Genosha, the Savage Land, Canada's Weapon X Facility, a bombed-out New York City with sewers crawling with Morlocks, and finally, Apocalypse's stronghold in Egypt. Apocalypse is searching for four mutants with "harmonic DNA" to take over the world. Apparently, Polaris, Quicksilver, Emma Frost, and Sabretooth fit the profile, and one by one, they are taken prisoner by Apocalypse, as are Beast & Angel. Things get worse when Destiny foresees a great treachery by one of the X-Men. In the end, the X-Men and Brotherhood have a massive showdown against Apocalypse and his Horsemen. Apocalypse's machine that will help him with his plans eventually malfunctions and the power of the X-Men and Brotherhood push Apocalypse in, trapping him there forever. Apocalypse's Four Horsemen are released from their hypnotization and the world is saved once more with the X-Men and Brotherhood back as enemies again. On the top of an Egyptian pyramid, Apocalypse's assistant, Mr. Sinister, is seen laughing maniacally.

X-Men Legends II: Rise of Apocalypse is a follow up to X-Men Legends. It is an action role-playing game released in 2005 for the Xbox, PlayStation 2, N-Gage, PSP, and GameCube video game consoles as well as the PC.

Having certain people in the team before a boss fight will also give an Easter egg of that team member and the boss having a dialogue before the regular text comes up. Such occurrences are:

Additionally, there are situations where meeting an NPC ally that will trigger similar conversations. These are:

Despite the similarities with the comic book continuity, the continuity of the X-Men Legends games are in a continuity of their own. The story of X-Men Legends II is inspired by the Age of Apocalypse storyline from the Marvel Comics series to coincide with the 10th anniversary of that event. It is not, however, a direct adaptation of the storyline. The original Age of Apocalypse occurred as a result of Professor X having been killed by a time traveler prior to his forming of the X-Men; Apocalypse was awakened from hibernation by this event and proceeded to take over an unprepared world. Apocalypse's rule in the game comes about as a result of events in the present day, and is not dependent on Xavier's absence. Some of the events and many of the principal characters still exist in the game the same as they do in the Age of Apocalypse, but many others exist as they do in the normal Marvel Universe.

Notable differences in continuity include:

The storyline also derives elements from the X-Men storyline "Apocalypse: The Twelve". In this storyline, as in the game, Apocalypse is searching for specific mutants to power the machine that will make him a god. However, in the game, there are four mutants rather than twelve, and they are wanted because they have "harmonic DNA". It is interesting to note that only Polaris from the original "Twelve" is in "The Four" who are used in the game.

X-Men Legends II: Rise of Apocalypse brings up to 4 players either offline or online. Players who have purchased it on the Xbox can play online via Xbox Live. During Xbox Live play, however, only the "Danger Room" and "Campaign" modes can be played. Players must also have the unlocked the "Danger Room Disc" that they wish to play.

Retrieved from "https://marvel.fandom.com/wiki/X-Men_Legends_II:_Rise_of_Apocalypse?oldid=5652258"
Community content is available under CC-BY-SA unless otherwise noted.