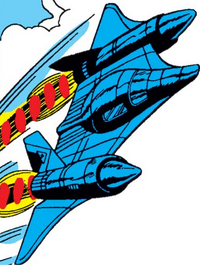 The X-Men's original "X-Jet" was a private jet, purchased by Professor X for the X-Men’s use shortly before an early encounter with the alien Lucifer.[1] It would be used by the X-Men for a long time as their principal mode of long-distance transportation, although fueling it was occasionally a hassle.

Sometime prior to their first encounter with the "living island" Krakoa, however, the X-Men updated their equipment with the so-called Stratojet, a specialized aircraft which itself was a Blackbird prototype. The X-Men used it to reach Krakoa, using its Vertical Take-Off and Landing system to lower it to earth. As the Stratojet was watertight, it was found floating upon the ocean surface after Krakoa was defeated, ejected into outer space by Lorna Dane's magnetism, where the X-Men easily recovered it and flew off.[2]

However, the Stratojet was soon after destroyed by Count Nefaria, firing upon it with surface-to-air missiles after he and the Ani-Men had taken over Valhalla Base.[3] A series of modified Blackbirds later replaced the Stratojet as the customary “X-Jet”.[4]

Retrieved from "https://marvel.fandom.com/wiki/X-Men_Stratojet?oldid=5622908"
Community content is available under CC-BY-SA unless otherwise noted.