View source
watch 02:07
Spider-Man: No Way Home Trailer Dropped - The Loop
Do you like this video?
Play Sound
Part of the Factor Three event

Just the three of us... against a joker with the power to knock down a mountain! Whatever happened to the weak villains... like Magneto and the Sentinels?

Appearing in "Into the Crimson Cosmos!"

Synopsis for "Into the Crimson Cosmos!"

The Juggernaut, having just defeated the X-Men, crashes through the countryside on his way to find an aircraft to fly to Europe so he can join Factor Three. The military attempts to stop him, but they are easily fought off and sent packing. 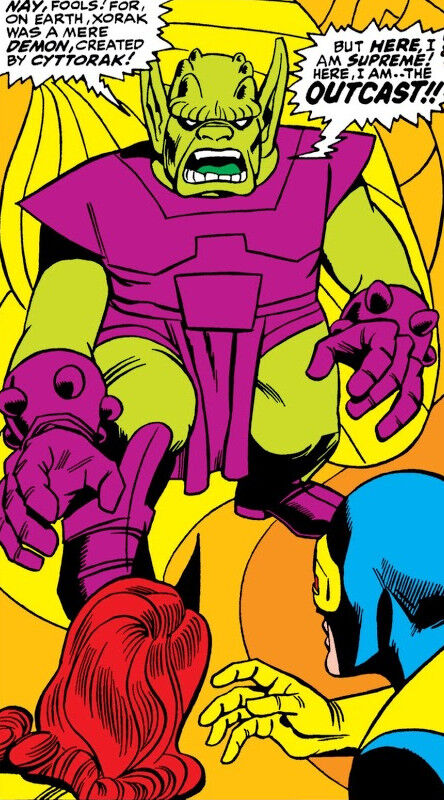 Repairing the machine, the X-Men try and use their computer to locate the Ancient One to see if he can help them defeat the Juggernaut. However, instead of finding the Ancient One, they are visited by the spectral form of his successor, Dr. Stephen Strange, the Master of the Mystic Arts. He tells them that he is on an important mission, but he stops long enough to impart the X-Men with a means to enter the gem. He cautions that only two of their members can venture within, and that they must return from within the gem within an hour, otherwise they will be trapped in the Crimson Cosmos forever. Cyclops volunteers himself and Marvel Girl insists that she travel with him. Cyclops accepts and orders the rest of the X-Men to keep the Juggernaut busy while they venture into the Gem. With the decisions made, Dr. Strange imparts the incantation into Cyclops and Jean's mind and teleports them to Korea to search for the Gem in the ruins of Cyttorak's temple.

The two X-Men materialize before some Communist soldiers, and easily fight them off with their mutant powers before unearthing the cavern where the gem has been buried for years. Speaking the incantation, Cyclops and Marvel Girl are pulled into the gem and find themselves into the strange Crimson Cosmos, where they are greeted by Xorak, who tells them that in this realm he is known only as the Outcast.

Back on Earth, the other X-Men fly the X-Copter to the nearby airport where the Juggernaut has gone. He is there to steal an airplane so he can fly himself to Europe and rendezvous with the masterminds behind Factor Three. The Juggernaut sends the security guards fleeing. While he is busy, Iceman, Angel and Beast attempt to keep him at bay with the powerful wind generated by the X-Copters rotor blades. This proves only a minor delay for the Juggernaut who manages to smash his way through the vehicle.

Meanwhile in the Crimson Cosmos, the Outcast attempts to wrap up Scott and Jean in the Scarlet Circles of Doom, however Jean manages to fend them off with her telekinetic powers. Redirecting them back at their attacker he is seemingly destroyed by them upon impact. Traveling further through the Cosmos, they find out that this is a false assessment when they are caught up in mystical coils and pulled toward a gigantic facial image of Outcast, however Cyclops' optic blasts easily shatter this apparition. With Outcast the only thing between them and the prototype gem, and their time dwindling fast, the two X-Men manage to defeat the creature not with their mutant powers, but by the ticking of Jean's watch which has been keeping track of the time they have spent in the Crimson Cosmos. Throwing the watch at Outcast causes the creature to suddenly crumble into dust. The two X-Men then procure the prototype gem that they have been seeking and are instantly transported by the Professor's bedside. The two rush after their comrades in the X-Plane, unaware that they have left Professor X alone to be captured by two intruders that have been lurking in the shadows.

While at the airport, the other X-Men have lured the enraged Juggernaut into a wind tunnel, but this too also keeps their foe at bay for only a short while. The X-Men are then forced to maintain a frontal attack against the Juggernaut however none of their attacks have any effect on him. Just before the Juggernaut can start attacking the X-Men, Scott and Jean arrive with the prototype gem and present it to the Juggernaut. Juggernaut, thinking that this new gem can increase his powers grabs it, however to his surprise, instead of granting him increased power the gem instead transports him away to the Crimson Cosmos.

With the threat of the Juggernaut over with, the X-Men return to the mansion to find that the Professor has been kidnapped.