Marvel Database
Register
Don't have an account?
Sign In
Advertisement
in: Reign of X, Fearless, Comics,
and 143 more
English

View source
watch 01:25
Jurassic World: Dominion Dominates Fandom Wikis - The Loop
Do you like this video?
Play Sound
Part of the Reign of X event
Part of the Fearless arc

48 - Things From Another World Exclusive Variant

Being cheered is gonna take some getting used to.

Appearing in "Fearless. Chapter One: "In Threes""

Synopsis for "Fearless. Chapter One: "In Threes""

Kelvin Heng was a child prodigy who graduated MIT summa cum laude at age thirteen. When he turned fifteen, his first IPO made a hundred million dollars on day one, but his parents shorted him out of the money and disappeared. Kelvin returned five years later as the CEO of Feilong Industries, and his second IPO promised planet-size innovations in biology and climate science. He later turned a lifeless desert green, and sought to achieve his dream of doing the same to Mars. This dream was crushed, however, when the citizens of Krakoa did it first. After augmenting his body to survive on Mars, he swore Krakoa would pay for the theft of his dream.

Seemingly overnight, the Treehouse, the new base of the X-Men, was constructed in the southwest corner of the 86th Street Central Park Transverse. Ben Urich, a reporter for the Daily Bugle, comes up to Cyclops to ask a few questions about Krakoa and mutants. Before Cyclops can answer a question about Jumbo Carnation, he leaves.

Cyclops shows Polaris around the Treehouse, but as they finish, Marvel Girl recognizes a telepathic wave of excitement from people in the city seeing a fireball in the sky. Rogue flies alongside the fireball to see what it is, but it crashes to the ground in front of her, growing into a building-sized organic robot. It throws Rogue through a set of buildings, so the other six X-Men jump in to defeat the monster. Rogue saves Polaris from getting hit by it, and Polaris says she owes her. Polaris then shields everyone from an energy wave that gives everyone in the tristate area a migraine. The seven heroes come up with a plan.

Polaris builds a giant robot mech to match the strength of the organic robot creature, and Sunfire powers it from the center with his fire. They don’t hold back, but are blasted with energy. Wolverine takes this as an opportunity to strike, and leaps into the organic robot, slashing its insides and defeating it for good. The Avengers and Fantastic Four show up and congratulate the X-Men on a job well done. Synch remarks that being cheered for is going to be difficult to get used to. They later find that the robot’s only purposes were to psionically destroy mammalian brains and to replicate itself using whatever they had on Earth. Marvel Girl tells everyone to be ready for the next attack.

Meanwhile on Gameworld, an alien loses a bet on the organic robot. The host of this event, Cordyceps Jones, tells everyone to keep betting on Earthlings being destroyed, but the planet itself is supposed to be preserved.

Then back on Earth, Dr. Stasis is experimenting on someone to achieve immortality. He wonders how the mutants are resurrecting their dead.

THESE X-MEN ARE... FEARLESS!

The heroes of Krakoa are here to save the planet!

Things might be complicated between the nation of Krakoa and the rest of the world, but to the X-MEN, things are simple — you do what’s right, you protect those who need protecting and you save the world we all share. Cyclops, Marvel Girl, Sunfire, Rogue, Wolverine, Synch and Polaris are the chosen champions of mutantkind, and they will not shrink from any battle for their home planet. 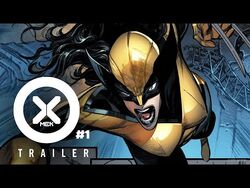