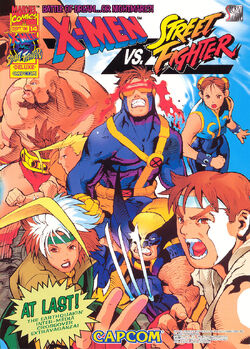 The X-Men team up with the Street Fighters to defeat Apocalypse.

The most common version found in arcades

Capcom released this version in an attempt to remove all the Infinites they knew of.

Like this? Let us know!
Retrieved from "https://marvel.fandom.com/wiki/X-Men_vs._Street_Fighter?oldid=6462134"
Community content is available under CC-BY-SA unless otherwise noted.