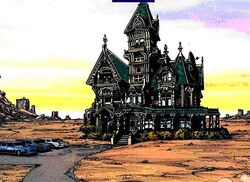 The X-Ranch was a brothel with mutants. Archangel was unknowingly funding it through his corporate holdings, but after he found out about it, he sent in Iceman to investigate. When Iceman went in human form, he saw a few rich men go in. He met Stacy-X there, and Madame Drache. All the mutants there were females who had certain bliss powers and could make the men who came in experience the 'ultimate pleasure.' The Church of Humanity also found out about the X-Ranch and attacked. They killed Madame Drache, Bette, and everyone else who got in their way, though with the timely arrival of the X-Men, Stacy-X was saved.[1]

According to an interview by Sally Floyd with Stacy-X, the X-Ranch was later rebuilt, though eventually closed down after M-Day, since there were fewer mutants available to work there.[2]

Like this? Let us know!
Retrieved from "https://marvel.fandom.com/wiki/X-Ranch?oldid=5885688"
Community content is available under CC-BY-SA unless otherwise noted.