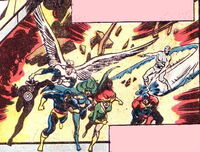 The X-Sentinels were the creation of Stephen Lang, head of Project Armageddon, a rogue U.S. government organization. Lang was able to create them using technology gleaned from Lawrence Trask's Mark II Sentinels. They were robot duplicates of the original X-Men, created in enough detail to fool the current team for a brief time into thinking they were actually fighting their friends, although there were minor errors, such as the Beast not being covered with blue fur and Cyclops using the previous version on his visor. The X-Sentinels duplicated the powers of the mutants as well.

The X-Sentinels were destroyed when Wolverine realized that the "Marvel Girl" he was facing did not have the scent of the real Jean Grey and he and his teammates no longer felt the need to hold back in destroying their foes.

Retrieved from "https://marvel.fandom.com/wiki/X-Sentinels_(Earth-616)?oldid=5552860"
Community content is available under CC-BY-SA unless otherwise noted.