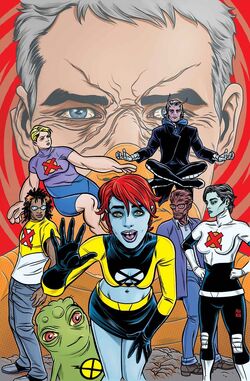 After the original X-Force seemed to sacrifice themselves, producer Spike Freeman thought up an idea to have a public mutant team with government backing, under the management of Coach.

Most of the original members were killed, especially in a disastrous mission trying to save the 'boy band' pop group Boyz R' Us from kidnappers. This was secretly planned by Coach and Zeitgeist, who felt the body count and changing rosters would add interest. Zeitgeist was regretful though, and ended up being one of the members killed, and only U-Go Girl and the recent recruit Anarchist survived.[3]

Based on those two and on Mister Sensitive, a new roster was set up. The team also quickly fight with the original X-Force, led by Domino, for the name of the team.[4]

Under the Orphan (Mister Sensitive)'s lead, the team started act also in a less interested way, saving a mutant child, Paco Perez, from military interest and disobeying to the Coach.[5]

Coach tried to rape U-Go Girl and kill the Orphan on two occasions, helped by Smoke and Succubus, but failed and the three were killed[6].

X-Force was among the numerous heroes captured by Graviton and freed by the Thunderbolts.[7].

Targeted by the Brotherhood

X-Force performed a mission in Japan, against the Tokyo Cell of the mutant terrorist Brotherhood, terminating all members of the group. In response, their leader X gathered the remaining members of the falling-apart Brotherhood to hit X-Force, targeting especially Doop the heart of the team, to both target what X sees as mutant collaborators to the system, and to send a message to mutankind: Or they were with the Brotherhood, or they were against them. The murder attempted ended in a bloodbath, as the X-Force kill them without questioning and some Brotherhood's members fight each other. As the Orphan wondered what had just happened there, Edith answered that the Revolution was over, leaving the devastated field. Once more, Lacuna was seen with them, on publicities or during the parade. Therefore, she wasn't seen fighting either the Brotherhood Tokyo Cell or their last gathering.[8].

As X-Force had to change name because of the original team pressure and because Spike Freeman had money to pay every month to the original team, Edie finally proposed X-Statix. Spike Freeman refused, as his collaborators had chosen another name, but Edie's name captured the attention of the public and was chosen (thank to Lacuna's emission), and was adopted by Freeman.[9].

Freeman himself was killed after trying to have Lacuna murdered.

After saving Doop from government hands, the remaining members decided to retire. However, on their last mission, a group of unknown gunmen ambushed them, apparently killing all. [10].

Only Doop has resurfaced since, joining the Jean Grey School for Higher Learning on Logan's proposition.[11]

When Katie Sawyer, daughter of U-Go Girl, was captured by Zeitgeist and his team, the X-Cellent for her powers. The team was needed to reunite. Dead Girl and Doop grabbed the once-dead Mister Sensitive and Vivisector. They moved on to some of their teamates children. The A, son of Anarchist, and Phatty, daughter of Phat, were both recruited. After the battle, they teleported out. Katie declined at first, but soon accepted to join as their teleporter.[12]

This X-Force was focused on the creation of fame and money.

Owned and financed by Spike Freeman, a young and arrogant trimillionaire, they were tasked to perform video-recorded missions (with Doop as their cameraman) proposed by various sources, and all intended to create a spectacular and bloody show, with high kill-rates.

In order to produce more money, in addition to the TV show, a network of X-Force Cafés ran by franchise-holders was created, selling many kind of merchandising, and creating a few minor events or meetings on some occasions.

Several Fan Clubs were also set up, focused on the whole team,[14] or on some members.[15]

Every information, such as the death of members or the new recruitments, was treated by marketing counsellors in order to produce suspense and catch the customers' and fans' attention in order to make them buy more products.[1]

The team was also tasked to inaugurate various public and private buildings such as malls or the Doop Kiddies Hospital,[1] and also to attend Conferences.[14]

Among the various stuff produced by or around the team are also the "X-Statix Mega Lottery".[16]

Additionally to X-Force/X-Statix merchandising, every members had their personal agent, agenda and merchandising, as Phat who had a range of weight-watching products, "Phat no more".[2]

Additionally, others shows pop out around X-Force/X-Statix. First, Lacuna rejected an asked membership to create Lacuna and the Stars, using her powers to infiltrate and drag intel about useless things about the stars, focussing on X-Statix. Later, the show O-Force was launch by Solomon O'Sullivan as a concurrent team, where the membership was decided by public's vote and no internal selection.[17]

For being a mercantile team with no interest in the social fights for their kind but only for fame and money, this group was blamed by many mutants, including the original X-Force[4], Wolverine[18] or the Brotherhood.[8] Also, they made induced a confusion in the public's mind, giving a false image of the mutants conditions.[19]

As X-Force had to change name,

In order to possess always ready members to be incorporated to the current line-up to replace deceased members, Spike Freeman has set several "farms", with X-Forces in training. Among the potential recruits were referenced Anti-Matter (Arlo Summers), Sycamore, Washout, Mant, Lightning Bug[1] and Corkscrew[2]

He had also a band of Eurasian mutants in training, called the Euro-Trash, Euro-Trash, composed of the Japanese Miz Tree, the German Wall (Günter Gross), the French Surrender Monkey, the Iraqi Blind Ali and the British Oxford Blue, stereotypical heroes.[22]

Retrieved from "https://marvel.fandom.com/wiki/X-Statix_(Earth-616)?oldid=6076075"
Community content is available under CC-BY-SA unless otherwise noted.