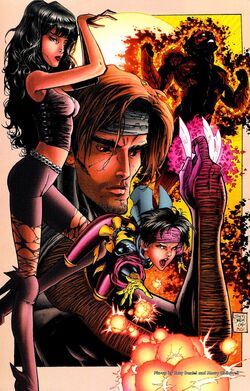 After he left the X-Men,[1] Gambit formed a group of thieves known as the X-Ternals, who would rob from Apocalypse and give to those who needed it. Members included Jubilee and Sunspot, as well as former musician Lila Cheney and her former roadie Guido Carosella. Unknown to all, Guido was secretly a double agent for Apocalypse. Their activities gained them a constant enemy in Madri Richter who became obsessed with capturing the X-Ternals in order to curry favor with Apocalypse. Gambit developed a romantic relationship with Lila, much to Guido's chagrin.[2]

The X-Ternals were asked by Magneto to collect a shard of the M'kraan Crystal, which was needed to repair the damage done to the universe.[3] To this end, Magento and the X-Ternals broke into the facility where Apocalypse kept his space records to learn the location of the Shi'ar galaxy and awaken Lila's latent teleportation abilities. While their mission was a success, they were attacked by Madri soldiers led by Richter. When they teleported away, they accidentally took Richter with them.[2]

Arriving in the Shi'ar galaxy, the X-Ternals clashed with the Imperial Guard, super-soldiers under the command of the mad Emperor D'Ken who sought to control the crystal himself. The X-Ternals fled and were brought to safety by an alien named Jonath who explained the origins of the crystal to them. They were attacked by the Imperials and Richter again when suddenly the planet was hit with a crystallization wave from the unstable M'Kraan Crystal. The X-Ternals were teleported to safety by the Starjammers before they could be caught in the wave.[4]

The Starjammers brought the X-Ternals to the planet where the M'Kraan Crystal was kept and went down to the planets surface with their leader Deathbird, D'Ken's sister. While Gambit, Lila, and Deathbird entered the crystal, the others stayed behind and held Richter, Gladiator, and an army of Shi'ar soldiers at bay. During the fight Sunspot connected with the crystal and was able to crystallize the entire attacking army. Inside the crystal, D'Ken was rendered immobilized by the crystal itself, while the robot defender Jahf told Gambit that in order to take from the crystal you had to give it something in return. Gambit would gave up his love for Rogue in exchange for a shard of the crystal. Upon exiting the crystal, the X-Ternals were forced to leave their friend Sunspot behind due to the fact that the crystal had made his body unstable. They teleported back to Earth before he likely exploded.[5]

Back on Earth, the X-Ternals had to deal with not only Richter, but the betrayal of Guido. In trying to escape from the Morlock tunnels, they lost the Crystal and failed to stop Guido from kidnapping Magneto and Rogue's son Charles. They were buried alive only to be saved by the X-Men Exodus and Dazzler.[6] Upon being brought back to the surface, Gambit told Rogue the bad news. Rogue mobilized a strike force to go after Apocalypse and rescue her son her husband Magneto and to recover the stolen M'Kraan crystal.[7] Of the X-Ternals, only Jubilee and Gambit accompanied the X-Men into the battle that ended with Apocalypse's death and the repair of the universe. During the final battle, Guido was slain by Rogue.[8]

Gambit rejoined the X-Men,[9] and later perished in battle against the Sinister Six.[10] The current activities of Lila Cheney and Jubilee are presently unknown.

Like this? Let us know!
Retrieved from "https://marvel.fandom.com/wiki/X-Ternals_(Earth-295)?oldid=6425964"
Community content is available under CC-BY-SA unless otherwise noted.