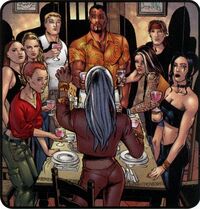 The X-Treme Sanctions Executive was a paramilitary police force charged with keeping the peace between mutants and humans, similar to the Xavier Security Enforcers of an alternate timeline.

The XSE was founded by Storm at the behest of the United Nations in order to police the growing mutant population. Though initially Storm acted alone, she soon signed up the other members of the X-Treme X-Men as officers, forming a legitimate mutant organization (though not the first, with the second X-Factor having been government-run).

After a confrontation with the Fury, Cannonball took a leave of absence to recuperate from his injuries. He then joined the newly reformed X-Force team, but and then returned to the X.S.E. team. Sage, meanwhile, rejoined the Hellfire Club to keep an eye on Roberto Da Costa (who had become the new Lord Imperial) to make sure he was not corrupted by power, like Sebastian Shaw. After the effects of M-day Storm stayed in the African country of Niganda to help bring things back to normal.

Since M-Day and the enactment of the SHRA, the team has largely ceased its activities as Law enforcement,[1] concentrating on cleaning up the damage from the day and liaising with the US Governments O*N*E program.

Retrieved from "https://marvel.fandom.com/wiki/X-Treme_Sanctions_Executive_(Earth-616)?oldid=5766154"
Community content is available under CC-BY-SA unless otherwise noted.