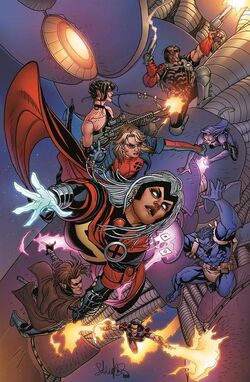 Not trusting Xavier or anyone else with knowledge of the future of mutantkind, Storm had secretly gathered a squad of mutants to obtain the prophetic diaries of Destiny. The team left the safety of the Institute and became mobile. Early on, Psylocke was killed and Beast was critically injured by Vargas.

Australian siblings Lifeguard and Slipstream later joined in the quest. Eventually the team abandoned the search after realizing the prophecies only came true if you chose to let the diary control their actions.

Without purpose, the X-Treme team returned to the Mansion (minus Slipstream, Lifeguard, and Thunderbird). Rogue and Gambit took a leave of absence after their powers were lost. Conflict with Emma and Xavier over the fate of an accused mutant killer quickly drove them away again. Cannonball (Sam Guthrie) joined the team before they faced Reverend Stryker and Lady Deathstrike.

Storm was soon asked by the United Nations to lead the X-Treme Sanctions Executive (XSE), a government sanctioned and peaceful paramilitary force responsible for policing relations between humans and mutants. The remaining X-Treme members joined along with Wolverine and Magma. Rachel Summers was rescued from Elias Bogan by the XSE, and also joined.

Retrieved from "https://marvel.fandom.com/wiki/X-Treme_X-Men_(Earth-616)?oldid=5625508"
Community content is available under CC-BY-SA unless otherwise noted.