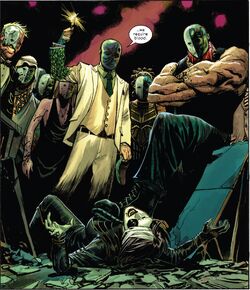 The primary members of XENO first met in South Korea, performing blood tests on each other to prove that none of them possessed an X-Gene, but what they didn't count on was the spy in their midst, Domino, sent to investigate the mysterious cult. She was captured and held for experimentation, yielding the use of grafts from Domino's skin to mask XENO's soldiers as mutants so they could invade the mutant nation of Krakoa without raising alarm. There they carried out a massacre, slaughtering many mutants including one of their main leaders, Charles Xavier.[1]

During the autopsy of the murderers' bodies, the mutants discovered that they were bioengineered killers. In search of more answers about the attack Wolverine and Quentin Quire went to South Korea where in a shed belonging to XENO, they found a factory created to raise murderers, and Domino in a tank with half her skin ripped off.[2]

Wolverine, Domino, and Quire managed to escape the factory, and in order to leave no trace, the group exploded the deposit, destroying any evidence of its existence.[3]

Like this? Let us know!
Retrieved from "https://marvel.fandom.com/wiki/XENO_(Earth-616)?oldid=6100167"
Community content is available under CC-BY-SA unless otherwise noted.