Marvel Database
Register
Don't have an account?
Sign In
Advertisement
in: X of Swords, Comics, X of Swords: Creation Vol 1,
and 176 more
English

View source
watch 01:25
Jurassic World: Dominion Dominates Fandom Wikis - The Loop
Do you like this video?
Play Sound
Part of the X of Swords event

It's exactly what you think, mutant. You step into the arena, knowing the full measure of what you're fighting for... You face your enemy, who wants nothing less than your total annihilation... you look them in the eye, steady yourself... And then... And then... You raise. Your. SWORD.

Appearing in "X of Swords: Chapter 01"

Synopsis for "X of Swords: Chapter 01"

Standing at the foot of a massive army, the The First Horsemen gaze upon Del Di'Lorr, the last watchtower of the Kingdom of Dryador. Death gives the command, and the army attacks, quickly breaking through the walls and pouring into the city. Inside, the ruler of Dryador, the Cursed King, prepares to make his final stand. He sends a squire with a warning to Saturnyne of what is coming. The Horsemen allow the messenger to flee, though not before Pestilence shoots him with an arrow, poisoning him.

The messenger reaches the Starlight Citadel and warns Saturnyne that the tower and Arakko have fallen. Saturnyne prepares to make a tarot reading, sending her servants out to acquire what she needs. They summon an eldritch horror living within a sun and gather its essence, forging it into a seeing eye. She lays out a tarot reading; Judgement, Four of Wands, The Hanged Man, Eight of Cups and Ten of Swords. Each card portends to the mutants of Krakoa and Arakko.

On Krakoa, the Summoner emerges from the gate bearing a grievously wounded Banshee. He is taken to the Healing Gardens, where the Summoner tells Apocalypse that they were ambushed on the way to Arakko. Apocalypse brings Summoner before the Quiet Council. When asked why he built the External Gate, he tells them that he did so in the hope of re-uniting Krakoa with its lost half, which the island itself supported. Summoner tells the Council that they were ambushed by the dark armies of Amenth, and that Unus was captured while he fled with the injured Banshee to warn the Quiet Council of the coming threat. The Council debates what to do with the gate, and while the majority vote to destroy it for fear that the Amenthi hordes will use it to cross over, Krakoa overrules them, stating that the gate is not to be destroyed. Apocalypse volunteers to lead a force to rescue Unus and leaves to ask for volunteers, as the mission is not sanctioned by the Quiet Council.

The volunteers are composed of Siryn, Havok, Monet, Beast, Archangel, Rictor, and Rockslide, who join Apocalypse and Summoner. As they cross through the gate, they find the army of Amenth laying siege to the Starlight Citadel. Apocalypse quickly spots the First Horsemen, his children, and weeps as he sees them. He approaches them, asking how it is that they are still alive if Arakko has fallen. While Apocalypse and his team make contact with the Horsemen, Rachel Summers and Cable examine the wounded Banshee, feeling his mind screaming out to them. They examine his memories, and are horrified to learn that Summoner had lied; he betrayed Banshee and Unus and was now leading the Krakoans into a trap. While examining his memory, they are suddenly met by Saturnyne, who tells them they are looking for the wrong thing. She implants the information of what they need into their minds. Cable runs to tell Cyclops and Jean Grey while Rachel stays behind to continue to probe Banshee's mind.

After the Horsemen tell Apocalypse that their mother fell to the Twilight Sword, they and Summoner suddenly ambush him. A fight breaks out; while Beast and Rictor try to carry a wounded Apocalypse back through the gate, the others hold off the Horsemen and the Amenthi army. Rockslide is killed by Summoner and Rictor is shot by an arrow from Pestilence, prompting Siryn and Archangel to carry him and Apocalypse through the gate as Beast calls a retreat. Havok, Monet and Polaris remain behind to make sure no one else crosses through the gate. Monet telepathically reaches out to Saturnyne to ask why she won't help them in the battle, but she refuses her, prompting Polaris to drag the Starlight Citadel down. This is in fact just what Saturnyne intended, and she proceeds to freeze the two warring forces in place. She chastises Death for bringing an army into her lands, and temporarily reverts him to a child as a show of her power. Death remains defiant, replying that they will conquer Krakoa no matter the cost. As the conquerors of Dryador, Saturnyne offers the Horsemen the chance to earn their prize with her good will; in three days time they will gather their greatest champions to fight the champions of Otherworld for the right to pass through the External Gate and claim Krakoa. Death agrees, and Saturnyne unfreezes the Krakoans. Knowing they have no choice but to fight in order to save their home, they volunteer to act as Otherworld's champions.

Saturnyne produces another card, predicting each side's champions by the blade they wield. For Arakko, they are: The Twilight Blade, Mercy, Vermilion, the Red Sword of War, Colony, the Black Bone of Amduat, Seducer, Pogg Ur-Pogg, Purity, Alluvium and Muramasa. For Krakoa, they are: Muramasa, the Sword of Might, the Starlight Sword, Grasscutter & Godkiller, Warlock, the Soulsword, the Scarab, the Light of Galador and Skybreaker (Sword)

A tower. A mission. A gathering of armies. 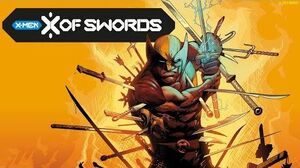