Marvel Database
Register
Don't have an account?
Sign In
Advertisement
in: X of Swords, Comics, X of Swords: Stasis Vol 1,
and 123 more
English

View source
watch 01:36
We're Getting Mutants in the MCU - The Loop
Do you like this video?
Play Sound
Part of the X of Swords event

Swordbearers. Most of you are mutant. You have tasted the sweetness of immortality--an evolution of our people. Now, we step into the Otherworld, where all realities are one, and your defeat will mean the death of Krakoa, the death of this Earth and the death of you, as you are now, never to return. So when you draw your sword, you must not fight like a human, who stands to lose a few years of toil--but like a mutant, who stands to lose forever in paradise. For if you do not... you will not be the first immortals I have watched die.

Appearing in "X of Swords: Chapter 11"

Synopsis for "X of Swords: Chapter 11"

Ahead of the coming tournament, Saturnyne sends emissaries to invite the rulers of Otherworld's realms to a council. Among the realms her emissaries travel to are the Crooked Market, ruled by Mad Jim Jaspers, the vampiric kingdom of Sevalith, the fury-controlled Infuri the Everforge, the rival faerie realms of Roma Regina and the Holy Republic of Fae, ruled by Roma and Merlin respectively.

The Kingdoms discuss various matters, and conflict quickly erupts between Merlin and the Horsemen of Famine and Pestilence, who hold the former seat of Dryador by rights of conquest. They inform Saturnyne that they have gathered their ten champions for the coming tournament against Avalon, which is represented by the champions of Krakoa. On Krakoa, Apocalypse gives a speech, preparing the champions for the battles ahead.

Three days prior, Pestilence prepared the ritual lock that would be opened by the ten gathered champions of Arakko. Summoner is the first to present his sword, and while the Horsemen debate the remaining champions, Annihilation orders them to gather them and their swords without delay. Summoner seeks out Redroot, the speaker of Arakko. Redroot is initially hostile, but after Summoner tells her that the battle will end with Arakko and Krakoa re-united, a weeping Arakko gives her consent. Pestilence and War recruit Pogg Ur-Pogg, a mercenary, by offering him a great deal of precious gems, and enticing him with the promise of a new world to plunder should they win. Summoner finds Bei the Bloodmoon, who readily agrees to join simply for the pleasure of combat. Famine and Death journey to the Ivory Spire waving white flags, seeking the White Sword. The White Sword taunts them, and questions why he should join them in their endeavours after they betrayed Arakko and submitted to Amenth. The Horsemen promise him anything he desires if they win, and the White Sword accepts. Pestilence and War seek out their aunt, Isca the Unbeaten, who readily accepts, while Pestilence and Death break the peace Arakko made with the Amenthi horde by plundering a sacred temple in order for Death to retrieve the Black Bone of Amduat. With Solem already recruited by War and Pestilence, and having found his blade, the champions of Arakko are ready.

The champions of Krakoa arrive in the Starlight Citadel. Apocalypse explains to them that the swords were a key, to prove they were worthy for the next step in the game, whatever it may be. He tells them they will play along for as long as the game suits them. Saturnyne arrives and shows them to their rooms, telling them to prepare for a banquet where they will meet their enemies. Each room has a card corresponding to its guest; Captain Britain receives the Nine of Swords, depicting her limp body skewered by astral swords, Cypher receives the Two of Cups, depicting him cheering a cup with an obscured figure, Gorgon discards his card, dismissing it as ridiculous, Captain Avalon receives the Knight of Pentacles, depicting him in action, brandishing the Sword of Might, Magik receives the Four of Wands, depicting her performing a magical ritual, Cable receives The Fool, depicting him standing on the wing of a space ship, gazing out over the stars, Wolverine receives Strength, depicting him being wrestled to the ground by Summoner, Storm receives Death, depicting her carrying a black banner atop a horse, at the foot of an army, and Apocalypse crumbles up his card, angrily declaring that the game no longer suits him.

Angered by his card, he confronts Saturnyne, demanding to know its meaning. Saturnyne bids him to accompany her to her next meeting and restores his card; it is The Lovers, depicting Apocalypse embracing his wife, with the specter of death above them. As Apocalypse and Saturnyne arrive at her destination, he is met by Annihilation, which is revealed to have become one with his wife, Genesis.

A ritual. A parliament. A game begins. 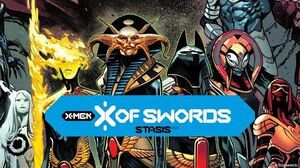