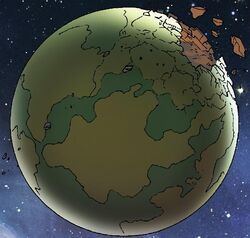 Xandar was the birthplace of the Nova Corps, and has suffered from many destructive sieges.[citation needed]

Xandar was almost completely destroyed by the Luphomoid Zorr the Conqueror, but was saved by the timely intervention of Uatu the Watcher. Uatu then assisted the Xandarians in creating a network of interconnected domed cities out of the largest remaining pieces of the planet.[citation needed]

The planet is nearly destroyed again by the Skrulls. Later still Nebula destroyed the planet, massacring the Xandarians and the Nova Corps.[1] The Nova Corps were resurrected by Richard Rider, a new Centurion who used the Nova Force power to reboot the Xandarian Worldmind which proceeded to clone the dead Xandarians including Queen Adora.[citation needed]

After a mysterious attack on the Kyln, Xandar once again called upon all of the Nova Corps to investigate, only to be utterly destroyed by the Annihilation Wave.[2]

Xandar acts as the capital of the Nova Empire and the headquarters of the Nova Corps. Xandar is a home to thriving, diverse, technologically advanced, and socially liberal population. Its government is a stratocracy ruled over by Nova Prime.

Xandar appears to be predominately covered by oceans. Additionally, Xandar's solar system contains three stars (two yellow and one red), which served as the inspiration for the Nova Corps' occulight symbol.

After more than a thousands years of war between Xandar and Hala, Nova Prime Irani Rael was able to broker a peace treaty with the Kree government. Unfortunately, some radical fundamentalist fractions of the Kree Empire refused to honor the peace treaty. Ronan the Accuser and his Sakaaran army were chief among these dissenters. Ronan began attack Nova Corps outposts, and garnered a deal with Thanos to destroyed Xandar in exchange for retrieval and delivery of the Orb. However, after obtaining the Orb, Ronan betrayed Thanos, keeping the Orb and planning to destroy Xandar with it. Ronan was only nearly prevented from succeeding by the intervention of the Guardians of the Galaxy with aid from the Nova Corps and Yondu and his Ravagers.[3]

According to Thor, Thanos and his forces decimated Xandar to acquire the Power Stone a week before attacking Thor's Asgardian refugees to obtain the Tesseract.[4]

Like this? Let us know!
Retrieved from "https://marvel.fandom.com/wiki/Xandar?oldid=5762410"
Community content is available under CC-BY-SA unless otherwise noted.