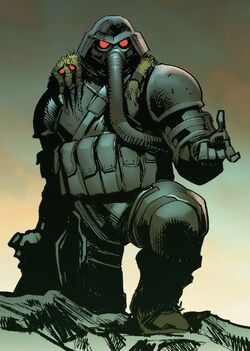 For centuries -- centuries -- we've been told we are damned! That we must live our lives in the dark, the world's dirty secret. That we are the corrupt shadows of humanity, undeserving of our own place in the light. And you -- like my father over there -- have accepted that. I say, by our own might, by the force of our will, we are redeemed! Together, united, we will reintroduce vampirekind to the world. And the world will tremble.

Xarus is the son of Dracula. Angry with humanity encroaching into vampire territory, and unhappy with his father's leadership, Xarus created a secret alliance with the leaders of various vampire sects: the Claw Sect (warriors), Charniputra Sect, Mystikos Sect (business), Nosferatu Sect, Atlantean Sect (a race of Atlantean vampires known as Aqueos), Moksha Sect (seers), and Siren Sect (seductresses), all to overthrow his father. He accomplished this at a centennial meeting of all the vampires. He and his allies drove stakes into Dracula and cut off his head.[2]

His allies in Mystikos invented devices which cancel the frequencies of light that are harmful to vampires. Xarus decided to use this devices to create a new, more dominant place in the world for vampires. He gave these devices to his allies so they could stage a raid on Kreiger Sect's fortress, eliminating their senior leadership. He had the Claw Sect not declare itself for him, so it could hang back and be contacted by any would-be traitors seeking an alliance, like his brother Janus and the peaceful Anchorite Sect.[2]

After an attempted betrayal by the Siren Sect, he curiously allowed their leader, Alyssa, to live and continue serving him. The Siren Sect leader then betrayed him again and slip[ed Janus one of the light-deflecting pendants, enabling him to escape after the Claw Sect had betrayed him to Xarus. Surrounded by a small army of vampires wearing the light-deflecting pendant, Xarus was declared Lord of the Vampires.[2]

Xarus then set his eyes on world domination. To ensure his take-over-the-world scheme, Xarus planned on converting all mutants in San Francisco into vampires. The first part of his plan hinged on first infecting Jubilee in order to lure in her fellow X-Men. The first to catch the bait was Wolverine, who was quickly converted with no apparent resistance from his healing factor.[3]

Xarus' apparent harassment of mutantkind drew notice from Cyclops, who directly contacted him. Xarus attempted to entice Cyclops to join forces, reasoning that both their kind have been scorned by humanity. Cyclops flat out refused, exactly the response Xarus was looking for as he mobilized his forces to assault Utopia. However, the X-Men and Atlanteans were prepared, as they revealed that Wolverine's healing factor was turned off before it could be turned back on to reverse his vampirism. Before Xarus' eyes, his entire task force was decimated. Though he lacked time to properly arrange another strike, Xarus was determined to triumph over the X-Men. Just then, Dracula returned, having been resurrected by the X-Men. Xarus attempted to rally his allies to stand against his father once again, but found no support, forcing him to fight alone. Dracula then returned the favor by ripping off Xarus' head, killing him.[4]

Having later returned to life, Xarus aided Dracula in his plan to start the vampire kingdom anew.[1] Xarus adopted the identity of Shadow Colonel, a supposedly dissident vampire who intended to challenge Dracula for the throne, weeding out the weaker members of the vampiric race accompanied by his allies, the Legion of the Unliving. When the Avengers assisted the Romanians caught in the crossfire of the Legion's massacre, the Shadow Colonel turned himself over to the heroes. He was taken to the Avengers Mountain,[5] where his associate, the Hellhound Sarge, took possession of the Ghost Rider and had him escort them away in his Hell Charger.

With the Ghost Rider added to their ranks, the Legion continued their crusade in Madripoor. They were intercepted by the Avengers,[6] but Xarus and the Legion escaped while the heroes confronted and subdued the Ghost Rider. The Legion of the Unliving fled to Russia, where they turned all the prisoners of the Sol-Iletsk Federal Penal Colony No. 9 into vampires to build up the ranks of the new kingdom. The Avengers came to stop the vampire outbreak, with the vampire-hunter Blade having previously joined their ranks. He wounded Xarus by severing his right leg and right arm before eventually decapitating him, but his head remained responsive after being detached. The Legion of the Unliving escaped with Xarus' body and headed to meet with Dracula in Chernobyl, where he intended to set up his new dominion.[1]

Vampirism: Xarus, like all other vampires, is capable of transforming an individual into a vampire by biting them. A special enzyme found only within vampire saliva is responsible for this transformation. After draining all of the blood from a victim, the victim enters a death-like state and returns to life three days later.

Xarus is an accomplished swordsman and magician.[citation needed]

Special Limitations: Xarus, like all vampires, has a number of special vulnerabilities. His greatest weakness, like that of other vampires, is that he must ingest about one quart of fresh blood in order to maintain his vitality. Otherwise, his powers will steadily decrease to the point where he enters a comatose state. Xarus is highly allergic to silver and can be severely injured, or killed, with silver weaponry. If Xarus is injured by silver, his recovery time is considerably slower than normal. Xarus is also unable to withstand exposure to direct sunlight. His tissue begins to instantly dry up and will crumble to powder within a matter of moments. Xarus can be killed by having a wooden stake plunged into his heart, somehow interrupting the mystical energies that keeps him alive. Xarus can also be killed by being decapitated and being exposed to fire. Xarus can also be affected by religious icons, such as the Star of David or a crucifix for example. Xarus is affected by the strength of the wielder's faith in the icon and religion it represents, not the size of the icon itself. Xarus must rest within his coffin during daylight hours. He must line his coffin with soil from his homeland in order to both sustain his power and travel more than 100 miles from his birthplace.

Like this? Let us know!
Retrieved from "https://marvel.fandom.com/wiki/Xarus_(Earth-616)?oldid=6483203"
Community content is available under CC-BY-SA unless otherwise noted.