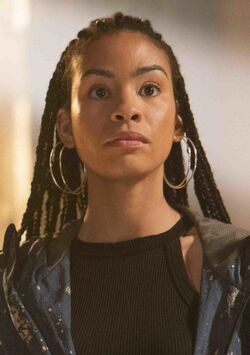 Xavin was a Xartan stowaway on the spaceship that carried the family of a royal Gibborim Magistrate, exiled from their home planet. Once discovered, Xavin became the family's servant, eventually learning everything there was to know about their ship. The vessel crashed on Earth on the western shores of North America in the prehistoric times, and only the Magistrate managed to eject himself while the others remained inside the buried vessel, trapped in there for millennia. Eventually the Magistrate found a way to excavate the vessel, and when he showed it to his half-Human daughter Karolina Dean, Xavin felt a connection to her, believing Karolina to be her betrothed. During the attempted launch, the vessel was destroyed, and while the Gibborim escaped to take over the bodies of nearby Humans, Xavin was left alone and began to search for Karolina.

Like this? Let us know!
Retrieved from "https://marvel.fandom.com/wiki/Xavin_(Earth-199999)?oldid=5775537"
Community content is available under CC-BY-SA unless otherwise noted.