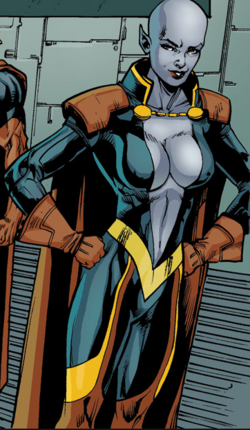 The Strontian was once a member of the Star Masters, was sent to capture Quasar but later joined with him to prove he was innocent of the Charter massacre, whilst also agreeing to act as a peacekeeping force for the Charter.[1]

The Strontian previously served the Shi'ar Empire, to which for an unknown reason she went against the Imperium. The response to this was to send her cousin Gladiator, who captured her and had her imprisoned under the claim she was mad.[2]

The Strontian was released from her imprisonment and pardoned of her crimes by Emperor Vulcan so she could be recruited into his Praetorians (Vulcan has offered her revenge on Gladiator in exchange).[3]

The Praetorians were captured on Kree-Lar by Nova Prime and imprisoned on Nu-Xandar (Ego) for their war crimes against their Nova Corps prisoners.[citation needed]

When Ego took back control of himself, she was transferred to Zan Philo's Corps starship Resolute Duty.[citation needed]

Superhuman Strength: The Strontian possesses tremendous physical strength, the exact limits of which are unknown as she is capable of matching Gladiator in battle.

Superhuman Durability: The Strontian can survive in the vacuum of space without the need for protective material and can withstand blows from powerful superhumans such as Gladiator without sustaining injury.

Flight: The Strontian is capable of self propelled flight.

Heat Beams: The Strontian is capable of firing highly concentrated beams of energy from her eyes. These beams are capable of cutting the skin of Gladiator.

Like this? Let us know!
Retrieved from "https://marvel.fandom.com/wiki/Xenith_(Earth-616)?oldid=5267673"
Community content is available under CC-BY-SA unless otherwise noted.