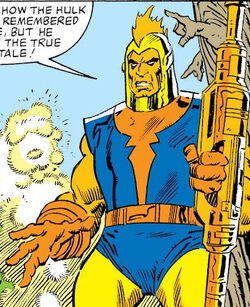 Xeron the Star-Slayer was dispatched to Earth to destroy a creature known as Klaatu, an energy creature that is "from beyond space." He however knocked a plane out of the sky thay contained the Bruce Banner. Changing into the Hulk he went to the top of the Empire State Building, were he is shocked by the arrival of Xeron and the sudden appearance of the gigantic Klaatu. Confused by the whole tableau unfolding the Hulk decides to attack Klaatu, however he is beneath the creature's notice and it simply swats him out of the way before disappearing again. Furious over the Hulk's involvement, Xeron has his slaves "row" his hunting ship toward the Hulk so that they may capture them. The Hulk has revived and tries to fight off Xeron and his men. Xeron however uses his energy harpoon to incapacitate the Hulk, draining him of enough energy to knock the green giant out and make him easy for capture. Taken aboard the ship, the Hulk revives and learns that his old foe the Abomination has a high ranking position aboard the ship.[1]

Forced aboard the a ship of aliens hunting the alien creature Klaatu, the Hulk is once more face to face with his old foe the Abomination who is First Mate aboard the vessel. Naturally, the Hulk and Abomination begin fighting, however the fight is soon broken up by Xeron who tells the Abomination that the Hulk will be useful in their hunt of Klaatu. An alien named Cerexo takes the the Hulk with him and explains that they have been all consigned to hunt down the illusive Klaatu and that they had found the Abomination in their chase, and since his addition to the crew the monster has killed his way into the position of First Mate. The Hulk spends his time thereafter being forced to row the giant space ship, and live and work among the aliens, all the while the Abomination is plotting his revenge on the Hulk. One day the Hulk is out watching the Earth in the distance when the Abomination attacks from behind, knocking the Hulk into space, Xeron and the others pull the Hulk back aboard the ship and Xeron warns the Abomination not to try another attempt on the Hulk's life. Just then they are summoned to meet the captain of the vessel, an alien named Cybor. In Cybor's presence, the Hulk is told by the half alien half machine that he has been on a quest to destroy Klaatu ever since the creature destroyed half his body. The Hulk is then sent back to his room where he suddenly reverts back into Bruce Banner. Although he is without the Hulk's great strength, Banner is put aboard one of the hunting vessels to row with the other aliens on their next trek to hunt down and kill Klaatu. During the hunt, Banner is knocked loose and is attacked by the Abomination, causing him to transform back into the Hulk. Cybor meanwhile harpoons Klaatu, but gets pulled and gets stuck on the creature as it flies into the sun killing him and seemingly destroying itself. Xeron and the others, on a damaged vessel, realize that their fate is numbered as well, with no means of returning to their ship and their artificial atmosphere on a limited supply, they too will meet their eventual end.The Hulk and Abomination continued their fight, their blows bringing them close to Earth's atmosphere to be pulled in by the planets gravity sending them into a free fall to the planets surface.[2]

Captain Cybor and the Andromeda crew still on the hunt for Klaatu recognize the Hulk lost in deep space, and order him to join them. Ol'Greenskin doesn't agree so Xenon hits him with his harpoon, consuming his energy til Cybor knocks him out with a laser blast. Hulk and the Puffball are brought up. But when they enter the world where Klaatu feeds, the Puffball stays in the Crossroads and the Hulk's anger starts to ignite.[3] The furious Hulk endangers Klaatu's capture. The oarsmen try stopping him but without success. When Ol'Greenskin hits the vessel, Xenon misses his shot, and the enormous pray alerted, vanishes. Captain Cybor decides to bring the Puffball with them to calm the Hulk for using him. When the green behemoth sees his partner, he says "friend" (first word pronounced in his brute state). Xenon locks the Puffball inside a force field that enables the alien collective to enter the worlds. When Klaatu is sighted, Xenon hits him with three harpoons. When the giant falls, he punches the Andromeda which also falls and gets destroyed. Xeron was wounded but survived, but preferred to die with the rest of his crew, which were then buried in the sand by Klaatu to give them some sort of burial even though they had hunted him for years. Hulk and the Puffball return to the Crossroads.[4]

Xeron has no relation to the Xeronians from the planet Xeron.

Like this? Let us know!
Retrieved from "https://marvel.fandom.com/wiki/Xeron_the_Starslayer_(Earth-616)?oldid=5106316"
Community content is available under CC-BY-SA unless otherwise noted.