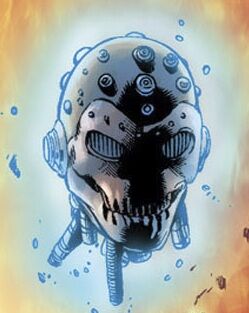 Xorn wore an iron helmet to contain the energies of his brain's star. He wore it almost constantly until he began posing as Magneto. When his Magneto helmet was destroyed by Cyclops, he wore the Xorn helmet once more until tricked into removing it by Jean Grey. This left his mind open to psychic attack.[1]

Retrieved from "https://marvel.fandom.com/wiki/Xorn%27s_Helmet?oldid=5011192"
Community content is available under CC-BY-SA unless otherwise noted.