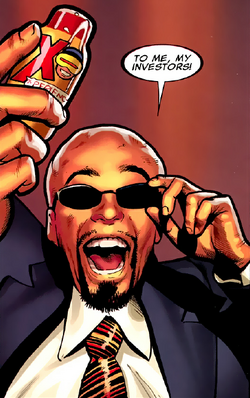 The Xperience is a mutant power drug which gives its user the powers of a certain mutant for a limited amount of time. There are two lines of Xperience produced by Lobe:

Those products are functioning on a dose-by-dose basis, and induce a dependence to it. They are presented in liquid form or in inhalers.

To promote his product, Lobe selected five young rich people among two thousand candidates, and offered to them the powers of the five original X-Men, obtaining his own versions of Cyclops, Marvel Girl, Angel, Beast and Iceman whom he used to combat crime in San Francisco.

Lobe then tried to force the X-Men to sell the exclusive use of the mutant genome to his society, in exchange of the antidote to the X-Flu,[2] while at the same time holding a party at the Triumph Hill Ballroom of SF, in order to get shareholders to invest on his product.

When the uninfected X-Men came to reclaim the destruction of the stock, Lobe gave the shareholders several samples of Xperience to combat the mutants.[1] When the infected X-Men also joined the brawl, Lobe activated an "Ebola Plus" function within the X-Flu, causing both mutants and humans with induced powers to fall sick within a few seconds. Lobe then erased the virus on Cyclops, who then made the potential shareholders go home.[1]

The entire Xperience stock was subsequently destroyed by Storm's lightning at Sublime Corporation's HQ. Lobe's "X-Men" apologized, with the exception of Penny Newsom (the young woman who had obtained Angel's powers), who left unnoticed with two inhalers that would provide Emma Frost's and Jean Grey's powers.[3]

Lobe was then sued by the X-Men's and Worthington's lawyers.

The known mutants whose powers were duplicated are the following:

Like this? Let us know!
Retrieved from "https://marvel.fandom.com/wiki/Xperience?oldid=6429424"
Community content is available under CC-BY-SA unless otherwise noted.