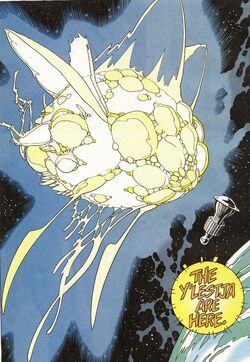 The Y'lestja, also called the Collective, are a kind of aliens who travelled through space, collecting data about everything and sharing them with

They send on Earth Radian, an alien agent, into the metallic sphere in Himalayas, to welcome them when they came to Earth to share their memories of past explorations and communions with other species. Radian then let go much part of his power, and the Collective leave to another world.

After an attempt of murder by Feng Huang, he survive as an energy form being, and merged with Kazimierz.

They were named "Y'lostia" by Kazimierz Rosikon, it is unknown if it is a misspelling from the author, or an alternate spelling of this alien name.

Like this? Let us know!
Retrieved from "https://marvel.fandom.com/wiki/Y%27lestja?oldid=2977946"
Community content is available under CC-BY-SA unless otherwise noted.