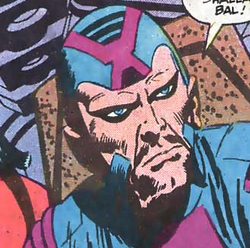 Yarro Gort was one of the richest men on Zenn-La and sought to wed Shalla-Bal, however her enduring love of the Silver Surfer prevented this. In order to try and win her heart, Yarro built a space ship to fly the two to Earth where Yarro hoped to show to Shalla-Bal that either the Surfer had perished or that the Surfer had moved on to love another.[1]

They arrived on Earth around the time that the Surfer was aiding resistance fighters in freeing a small South American town. When freeing one of the freedom fighters named Maria, she kissed the Surfer in gratitude, which was seen by Shalla-Bal, and used by Yarro Gort to suit his own ends.[1]

When their ship was shot down by the army in control of this country, the two ejected and Yarro offered his services to the dictator (El Capitan) there with technology from Zenn-La to help crush the opposition. The Surfer ultimatly stopped this attempt, however Shalla-Bal was shot for her interference in the battle. The Surfer was forced to kill Yarro Gort in battle when he attempted to use a high tech cannon to destroy him.[2]

Like this? Let us know!
Retrieved from "https://marvel.fandom.com/wiki/Yarro_Gort_(Earth-616)?oldid=5557406"
Community content is available under CC-BY-SA unless otherwise noted.