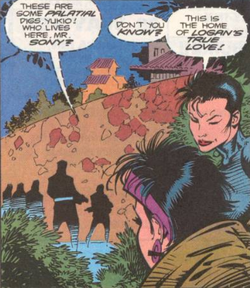 The Yashida mansion compound was a walled estate, built in the traditional manner of feudal Japan. The mansion itself had deadly internal defenses consisting of a maze and booby traps. It placed under siege by the Hand, who then launched on assault on the compound. Mariko Yashida and her clan put up a ferocious defense, with the assistance of betrothed Wolverine and Gambit. Resulting in heavy losses for the ninjas of the Hand, a battle which ended with the assassination of Mariko through treachery.[1]

Like this? Let us know!
Retrieved from "https://marvel.fandom.com/wiki/Yashida_Mansion_Compound?oldid=5573341"
Community content is available under CC-BY-SA unless otherwise noted.